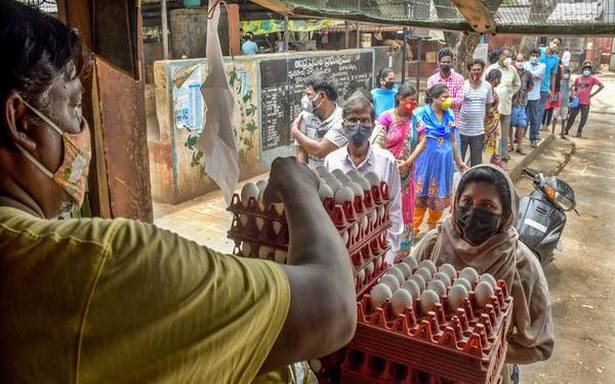 The Fishing Harbour, which usually witnesses huge crowds on Sundays, wore a deserted look this Sunday and many meat and chicken stalls in the city were also closed in view of the ban imposed by the Greater Visakhapatnam Municipal Corporation (GVMC) to prevent overcrowding in view of the pandemic situation.

However, some meat sellers came up with innovative ideas to beat the ban and sold chicken and mutton in residential areas. The corporation officials have also booked cases against some violators.

Several butchers made home delivery of meat based on the orders received, provided they place a minimum order of 2 kg. A few meat stall organisers prepared meat at their homes after receiving orders and delivered them to known persons. GVMC officials conducted raids at several places. The Sanitary Inspector of Ward No. 47 has caught a person who was allegedly selling meat on the terrace of his house at Kapparada, here on Sunday. The GVMC official seized the meat.

Meanwhile, there was a huge demand for eggs, as non-vegetarians opted for them as an alternative to meat on Sunday. Shops selling eggs, at wholesale rates, witnessed long queues. Some shopkeepers also sold eggs at higher rates in view of the surge in demand. Meanwhile, wine shops at several areas witnessed huge rush with people forming long queues from 7 a.m.