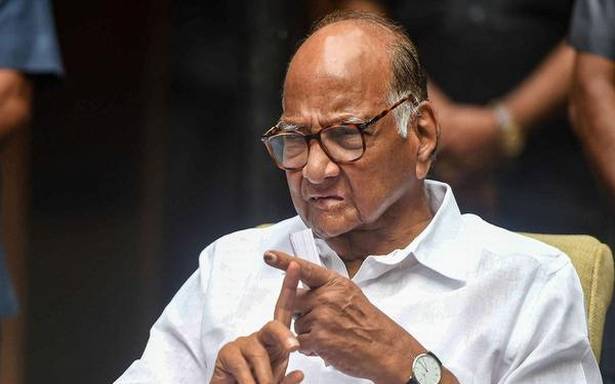 “It is out of despair and frustration that the ED was set upon Mr. Deshmukh… This misuse of central agencies is a new pattern of the BJP-ruled Centre. Even prior to this, central agencies had their eye on businesses owned by Mr. Deshmukh’s son. At that time, too, they failed to unearth anything. Anil Deshmukh is not the first to face such action. So, we are not unduly worried by all this,” said Mr. Pawar, speaking in Pune.

When asked about the Maharashtra BJP passing a resolution to seek a CBI inquiry against NCP leader and Deputy Chief Minister Ajit Pawar and Shiv Sena minister Anil Parab, Mr. Pawar said this was “novel”.

“A national party passing a resolution to demand a probe against the leaders of an opposition party is unheard of,” he said.

Taking a jibe at State BJP chief Chandrakant Patil, Mr. Pawar drily remarked: “he [Mr. Patil] is an achiever…he can do things hitherto unseen and unheard of, so we are not surprised.”

The NCP chief was speaking after an event where former Union minister Subodh Mohite, once an MP from Ramtek Lok Sabha constituency and associated with the BJP, joined the NCP along with his supporters.

Meanwhile, NCP leader and Baramati MP Supriya Sule said the ED searches were an instance of the flagrant misuse of central agencies by the BJP-led government at the Centre.

“The BJP keeps accusing the Congress of the excesses during the Emergency all the time. But what we are witnessing today is unprecedented… This is the first time I am witnessing a misuse of central agencies against political opponents on such a scale. This seems to be the BJP’s new standard operating procedure,” said Ms. Sule.

She observed such abuse of power for the sake of political ends had never previously been part of Maharashtra’s political culture, which did not involve harassing opponents for political gains.

Likewise, State NCP president Jayant Patil said the ED’s move was not surprising and that when the agency failed to uncover anything against Mr. Deshmukh, it would try and dig up something that may have occurred a decade ago in order to frame the ex-Home Minister.

Reacting to the raids, Shiv Sena spokesperson Sanjay Raut, while accused the government of misusing central agencies said that the ED, along with the CBI should instead probe the Ayodhya land case scandal which was a fit case for both of them.

“Why target Maharashtra’s politicians? If there is any fit case that the CBI should investigate, it is the Ayodhya land scandal. In fact, the BJP national executive should pass a resolution recommending a CBI probe into the Ayodhya land,” Mr. Raut said.