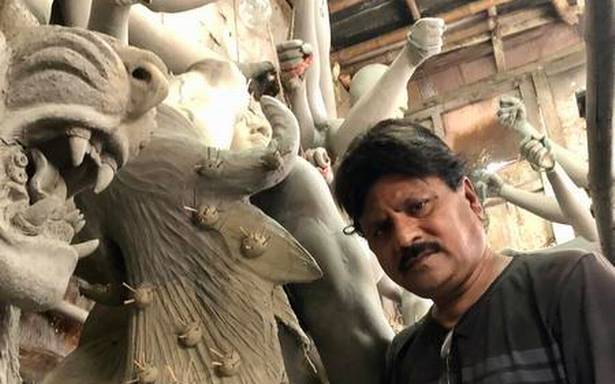 As celebrations are expected to be muted, they are the hardest hit among those who give shape to the festival

Durga Puja is a little over a month away, a time when — in normal times — Kumartuli throbs with activity and idol-makers are easily irritated by intrusions in the form of curious onlookers and photographers. But this year, they seem to have all the time in the world.

Indrajit Pal, in fact, offers to lead this reporter to his workshop — a luxury usually unthinkable of during peak season at this riverside artisans’ colony in north Kolkata — to show off the idols he is specially creating for the Durga Puja of 2021.

“Last year, I had depicted the coronavirus in black because people were in the dark about it,” says Mr. Pal, “but this year I am going to depict the delta variant, that too in steel grey, because we are no longer ignorant about the virus and at the same time yet to vanquish it.”

Depicted as the delta variant

During pre-COVID days, Pal, a third-generation artisan, made 12-15 sets of Durga idols every season; this year he is making only eight, more or less what he made last year, and of these three show the Mahishasura — the buffalo demon slayed by Goddess Durga — depicted as the delta variant with eruptions of spiky balls on the skin.

“The goddess will eventually vanquish the virus,” Mr. Pal adds philosophically. “In fact, last year she almost did. The number of cases came down drastically after Durga Puja, and went up only during the [Assembly] elections [in March].

If Kolkata is known as the City of Joy, much of that joy comes from the five-day Durga Puja — rather the long wait and preparations for it. While this year too, the celebrations are expected to be muted due to the pandemic, it is the idol-makers who are the hardest hit among those who give shape to the festival.

“The prices of raw materials have shot up, but we are unable to pass on the burden to the customers because they do no longer have that kind of money. For them, donations and the number of sponsors have come down. So, a set of idols we sold for ₹1 lakh in 2019 and that should ideally sell for ₹1.25 lakh today is being sold for ₹70,000,” rues Mr. Pal.

Similar is the grouse of Mukti Pramanik, who makes jewellery and accessories worn by the goddess and her four children. “During normal times, at this time of the year, I wouldn’t have time to eat — food would be lying on the table. But now, as you can see, I am sitting in an empty shop,” says Ms. Pramanik, who, over the last two years, lost her husband and one of her sons (not due to COVID-19) and now runs the business along with her surviving son.

“Earlier we had eight workers helping us, but this year we have only four people in all, including the two of us. We supplied to places in Bihar, Bangladesh, even London, but this year, though puja is hardly a month away, only three to four big ‘parties’ [associations] have placed orders so far,” she says.

For some artisans, business is marginally better than what it was last year, for some others, it is even worse; overall, the mood is nowhere close to the pre-pandemic times.

Kaushik Ghosh, who makes fibre glass idols shipped to customers abroad, is among the busy artisans of Kumartuli; so far, he has already dispatched four sets of idols to the U.S., three to Australia, and one each to Germany, Italy and the Netherlands.

“Pre-COVID days I would make 30-35 sets of idols to be sent abroad, this year I made only 17, but that’s an improvement from only seven that I made last year,” says Mr. Ghosh.