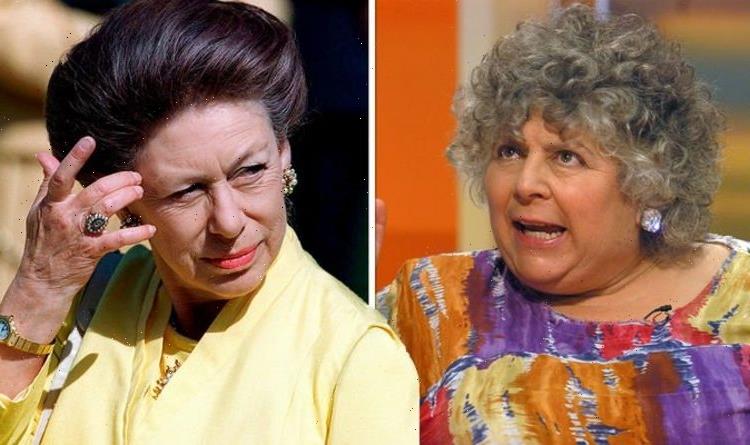 Miriam Margolyes has detailed her royal run-in with Princess Margaret which almost went awry. The Harry Potter actor recalled meeting her when she was working on a stage production.

Back in 1993, Miriam was appearing in a production of She Stoops to Conquer with Donald Sinden and David Essex.

The starlet was playing Mrs Hardcastle in the West End adaptation.

After one performance, she explained how Princess Margaret came backstage to greet the cast.

However, the actress recalled almost putting her foot in it when she mentioned one of their mutual friends.

Speaking in her new memoir, This Much Is True, Miriam said she had recalled show designer and Margaret’s friend Carl Toms was unwell.

She said: “I knew he had been ill and, without thinking, asked if she would pass on to him our loving best wishes.

“For a split second, her eyes narrowed and she stiffened.

“She was deciding whether I had been guilty of massive impertinence.”

However, thankfully everything worked out okay for the Romeo + Juliet actress.

“She saw from my concerned face that I only wanted to send Carl good wishes,” Miriam added in the extract serialised in the Daily Mail.

Although Miriam did tease things did not go so well when she met the Queen.

The actress has promised the story in full in her new memoir, which will be released on September 16.

The candid book promises to see the screen icon looking back on her career at the age of 80.

The synopsis of the book reads: “Now, at the age of 80, she has finally decided to tell her extraordinary life story – and it’s well worth the wait.

“Find out how being conceived in an air-raid gave her curly hair; what pranks led to her being known as the naughtiest girl Oxford High School ever had; how she ended up posing nude for Augustus John as a teenager; why Bob Monkhouse was the best (male) kiss she’s ever had; and what happened next after Warren Beatty asked ‘Do you f***?’

“From declaring her love to Vanessa Redgrave to being told to be quiet by the Queen, this book is packed with brilliant, hilarious stories.

“With a cast list stretching from Scorsese to Streisand, a cross-dressing Leonardo di Caprio to Isaiah Berlin, This Much Is True is as warm and honest, as full of life and surprises, as its inimitable author.”

Early reviews for the book have been glowing with Stephen Fry saying: “There is no one on earth quite so wonderful.”

Speaking about her book earlier this year to Booktopia, Miriam opened up about why she decided to write it.

“I can’t quite believe it but I’m actually 80, and so I thought it’s time to write my autobiography before it’s too late.

“And I’m doing it! I hope you’re going to enjoy it, I’m going to put everything in it.

“It goes from when I was conceived in an air raid until today.”

This Much Is True by Miriam Margolyes, published by John Murray on September 16, £20. You can buy the book here.