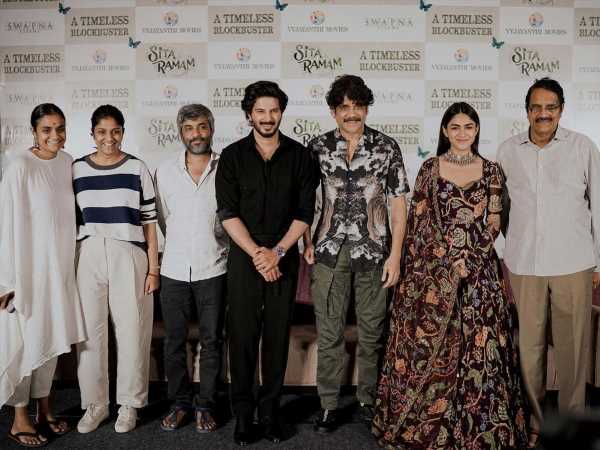 Sita Ramam movie has finally gained a tremendous success soon after its theatrical release on August 5th. It has stolen the hearts of the audience in every corner of the globe. Hanu Raghavapudi wielded a megaphone for the epic saga and brought out favourable outcomes with a stringent confidence.

As the film has reached heights, more than expectations, the whole team is on cloud nine and has celebrated a grand success meet today. The one interesting thing here is, the legendary actor Akkineni Nagarjuna has graced the event as a chief guest and sang the praises of the prosperous franchise.

Speaking at the event, Nagarjuna said, “He felt jealous of Dulquer for taking his role, and while watching the movie, his past blockbusters like Geetanjali, Manmadhudu and Santosham have got to his reminiscence. If the audience like love stories, they can’t stop watching them and they will remain as cult classics forever. The way of depicting the Sita character in the movie is very beautiful and everyone one will fall in love with that character. I love you Mrunal Thakur.”

Dulquer also said that many audiences are coming to theatres only to witness the classical character of Sita in the movie, which is being praised all over. He further said that Sita Ramam has not only gained success in Telugu, but also in all other languages.

Taking to social media, Dulquer posted all the ravishing pictures of the success meet and wrote, “The Sita Ramam success meet with the team and Nagarjuna sir as our chief guest! So glad to be back together with everyone to celebrate the love you all have shown on the film. Thanks to all of the Press & Media that attended!”