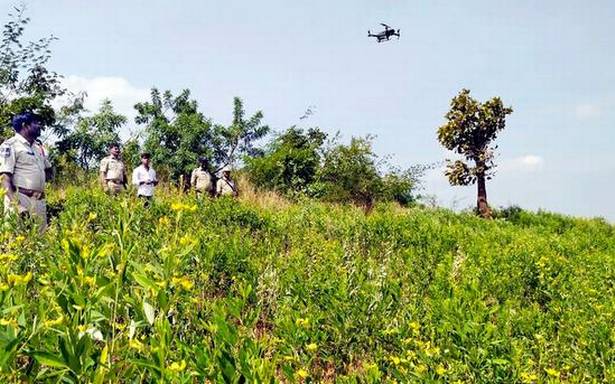 Transportation via Zaheerabad and Bidar has increased

The police are using innovative methods to find out places where ganja may be cultivated, which has become a serious issue in the State.

“We have used drones to search for ganja cultivation at Vithanaik tanda, Mirjampally tanda, Upparpally tanda and Jangorepally tanda about a week ago. Recently, on Tuesday we flew them at Sunnabatti tanda, Padigan tanda and Mandagubbadi tanda. All these tandas are mostly bordered with Karnataka areas. As ganja is frequently coming from neighbouring places, we searched those areas. However, we have not found any ganja cultivation,” said Mr. M. Viswanatham, Sub-Inspector, Chiragpally, who was involved in search of ganja. The raid was led by Zaheerabad Circle Inspector P Rajasekhar.

One of the officials on condition of anonymity said that Bidar became hub of transportation of ganja to other states and this is passing via Zaheerabad only.

The police and excise department officials are more vigilant for the past few months after cases of seizing of ganja have increased. At least two incidents were reported in the district headquarter town in recent past. In September and October the excise department booked six cases of dry ganja and arrested 12 persons. As much as 103.35 kilograms of dry ganja was seized by them in addition to confiscating six vehicles. Coming to ganja plants, two persons were arrested and 4,650 plants were destroyed.

The Prohibition and Excise Department officials seized three kilograms of Alprazolam and arrested two persons. About 500 grams of Alprazolam was seized from an auto at Kallakal village of Manoharabad mandal of Medak district on Tuesday. According to K.A.B. Sastry, deputy commissioner, based on the information provided by auto driver Tallapally Venu, excise officials searched Saptagiri lodge near Secunderabad railway station and seized 2.5 kilograms of Alprazolam from Roop Singh, a resident of Ratlam village of Madhya Pradesh. He was identified as main supplier of Alprazolam. The cost of the substance was stated to be ₹21 lakh while ₹26 lakh was seized.