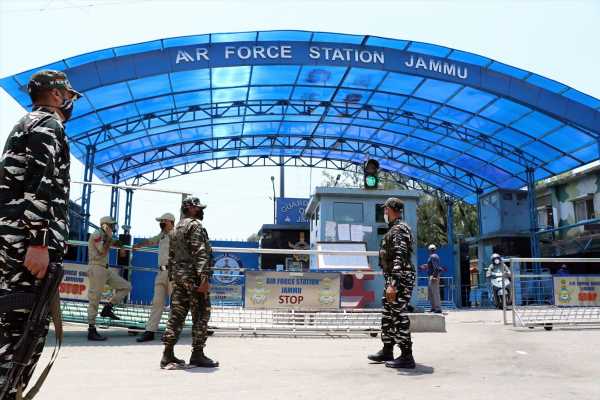 ‘The fact that this happened and the fact that we were not able to bring it down, we were not even able to trace from where it came from and where it went, certainly raises questions on our level of preparedness.’

Sushant Sareen is a Senior Fellow at the Observer Research Foundation, the New Delhi-headquartered think-tank, and a leading expert on Pakistan-sourced terrorism.

In a two-part interview with Prasanna D Zore/Rediff.com, Sareen discusses the implications of the drone attack on the Indian Air Force base in Jammu early on Sunday, June 27, morning.

“Right now, we are talking about maybe a terrorist using drones against a target, but what happens tomorrow if instead of lobbing artillery shells across each other’s borders, you start using a suicide drone or drones which simply come and drop payloads and go back?” asks Sareen.

Soon after Prime Minister Narendra Damodardas Modi held talks with leaders from Kashmir we had two drone attacks on the IAF air station in Jammu. What does it tell you about the timing of these attacks?

It’s not very clear whether the timing (of the drone attacks) has to do with the political outreach in Jammu and Kashmir. Whether it has to do with certain internal dynamics, which are supposed to be playing out inside Pakistan or sense of disquiet over some of the steps which the hybrid regime of (Pakistan Prime Minister) Imran Khan and (Pakistan Army chief General Qamar Javed) Bajwa are supposed to be taking vis-à-vis India.

Or, if it has to do with the alleged Indian involvement in the bomb blast which took place outside Hafiz Saeed’s house.

There is also some speculation that it is somehow related to Pakistan getting listed on the FATF’s (Financial Action Task Force) grey list (under which Pakistan has been asked to act against terrorists Hafiz Saeed and Maulana Masood Azhar) two days earlier. At this juncture one does not know the exact motive behind this drone attack.

We also don’t know who exactly is behind it (the drone attack) because nobody has claimed responsibility yet, but the fingers are pointing towards Pakistan and its favourite terrorist groups.

The consensus right now is that it’s probably the Lashkar-e-Tayiba which is behind this particular attack. But like I said, we don’t know the motive yet.

Is the motive behind this drone attack to restart hostilities along the Line of Control, or is it to deliver a message that they are going to escalate the violence in the Union Territory, we are still trying to really get our heads around what exactly are they trying to play at.

While all fingers will point towards Pakistan, from where is Pakistan getting such sophisticated drones to launch aerial attacks?
Is China involved?

We don’t know whether this was a very sophisticated drone or a very crude attempt. We are still trying to estimate and assess what exactly this drone was.

If it was one of those very sophisticated drones, and it could very well have been, then of course, they are getting this technology from both China as well as from Turkey.

Now, if this was a crude drone, which other terrorists around the world have rigged up to drop either explosives or weapons, then it is not very sophisticated technology, but it is like innovating on somewhat crude technology, and using it reasonably effectively.

This is for the first time drones have been used to target India’s defence assets.
How serious is the threat from drones to India’s defence infrastructure, especially along the border with Pakistan and how capable is India of thwarting such attacks?

The fact that this happened and the fact that we were not able to bring it down, we were not even able to trace from where it came from and where it went, certainly raises questions on our level of preparedness. That is one part of it.

I think it is extremely dangerous because it introduces a completely a new element in the asymmetric warfare which is engaged by Pakistan against India.

Right now, we are talking about maybe, a terrorist using drones against a target, but what happens tomorrow if instead of lobbing artillery shells across each other’s borders, you start using a suicide drone or drones which simply come and drop payloads and go back?

At one level it is major escalation; at another level, it is certainly a new element and an escalation. But is that escalation going to be below your threshold of tolerance which leads you to then take other measures, or do you retaliate in the same measure? This is likely to become a new challenge going forward.

How are you going to play this thing out?

How are you going to respond?

What are your fallback positions?

How are you gaming this technology?

How will these new technologies be used to change the battlefield matrix?

These issues should now start bothering us. And then, of course, we need to figure out both our defensive as well as offensive capabilities to counter this.

As of now, I am saying only what’s there in the public domain, and I am not seeing any practical demonstration about how prepared we are to face this novel challenge.

The Union home ministry has given the investigation for this attack to the National Investigation Agency.
How equipped is the NIA to investigate a drone attack?
Or should the Indian Air Force should have undertaken this investigation that involves use of sophisticated drones?

Just because the NIA is investigating, it does not preclude the NIA taking assistance from the air force or other more technically capable organisations; they could consult the scientists from DRDO. That’s not precluded.

There is also a legal requirement; it is an incident of terrorism and the agency which is mandated to investigate incidents of terrorism is the NIA. The NIA can bring whatever resources it wants in its investigation.