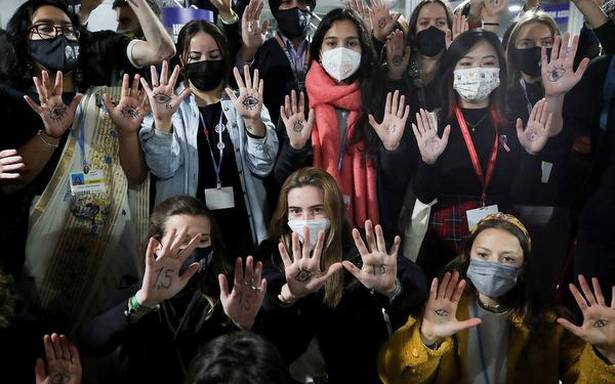 The document urges the developed countries to ‘urgently scale up’

The provision of finance for mitigation and adaptation of the impact of global warming is one of the key sticking points. The United States, Canada, several countries of the European Union and the United Kingdom, among others, have dragged their feet on a commitment to provide $100 billion annually by 2020. India, along with several other developing countries, has for years pointed out that not providing this money implies that the developed countries’ demand to coerce major developing countries into a net-zero commitment by mid-century is unjustified. It also violates the core principle of equity and climate justice, they aver.

Last week, in Glasgow, Prime Minister Narendra Modi committed to India reaching net zero by 2070, two decades after 2050. Updated reports from the Intergovernmental Panel on Climate Change say that the earth’s best shot at keeping temperatures from rising beyond 1.5°C by the end of the century is most nations achieving net zero by mid-century. Net zero is when a country’s greenhouse gas emissions are balanced by removing an equivalent amount from the atmosphere. Mr. Modi also said that nearly a trillion dollars in finance was needed from the developed countries.

The countries debating the agreement at the ongoing 26th Conference of Parties (COP) must have a final document in place by Friday, the concluding day of the summit.

The long road to net zero

The draft document also says that it “recognises that limiting global warming to 1.5°C by 2100 requires rapid, deep and sustained reductions in global greenhouse gas emissions, including reducing global carbon dioxide emissions by 45% by 2030, relative to the 2010 level, and to net zero around mid-century.”

It also called upon the nearly 200 countries which are part of the negotiations to “accelerate the phasing out of coal and subsidies for fossil fuels.”

Though Mr. Modi has committed to dramatically increase the use of renewable energy by 2030, India is also likely to double its use of coal in the interim given how it sees the economy growing in the years ahead.

“The funds necessary for adaptation must increase,” said Bhupender Yadav, Environment Minister. “Our consistent stand has been that developing countries such as India need transparency in terms of what kind of market mechanism will be in place. This is necessary to ensure that the developing and developed countries are on a level playing field.”

The LDCF is for a group of countries, several of them island nations, that have the least carbon emissions but also are at greatest risk. Since 2001, it has provided $1.7 billion for projects that help buffer the impacts from warming.

Independent commentators appeared unimpressed. “The decision does not recognise strongly enough the extremely urgent need to close the huge 2030 emission gap, and to establish a high-level political process in 2020 to do so. At this stage, the draft only urges parties which have not yet submitted new or updated commitments to do so before 2022, yet many have submitted NDCs that are not at all improved or enhanced and/or are nowhere near sufficient for the Paris agreement’s 1.5°C limit,” said Bill Hare, Founder, Climate Analytics.

“The UN Secretary General should be invited to convene world leaders at the end of 2022, specifically to address closing the 2030 mitigation and finance gap. If this is pushed off until 2023 then the process will really only be addressed here commitments for 2035, nearly 15 years away, leaving the massive gap in 2030 unaddressed,” said Mr. Hare.