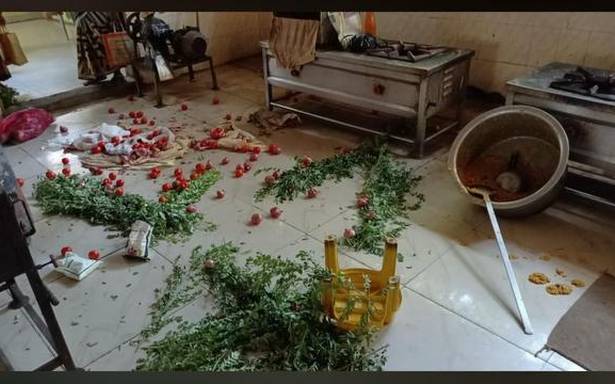 The incident was condemned by the AIADMK, AMMK; DMK Saidapet MLA-elect Ma. Subramanian said CM-elect M.K. Stalin has ordered the restoration of the name board

A group of men belonging to the DMK entered an Amma Unavagam (Amma canteen) in Mogappair, Chennai on Tuesday, and ransacked the premises, and reportedly demanded that the staff remove the photograph of former Chief Minister Jayalalithaa from the canteen’s name board.

Soon after a video of the incident went viral, DMK Saidapet MLA-elect Ma Subramanian tweeted that DMK president M. K. Stalin had ordered action against two partymen and directed that the name board of the “government outlet” be restored. Following this, some DMK functionaries were seen taking efforts to restore the broken name board.

The Amma Unavagams, a flagship scheme of the erstwhile Jayalalithaa government, serves food at affordable costs in localities across the city. During the COVID-19 pandemic, food here was served free of cost.

The incident took place at the Amma Unavagam located at ward 92 in Mogappair. In the video, a few men are seen entering the outlet and coming out with a sign board of instructions. They are seen damaging another sign board hung on the wall of the premises to the shock of women staff who were standing there. A portrait of former Chief Minister Jayalalithaa was pulled down from the wall and groceries and vegetables from inside were thrown. The men also allegedly vandalised cooking utensils inside the premises besides threatening the staff.

Police rushed to the spot and conducted inquiries.

Mr. Jayakumar said the outlet was serving the poor during natural calamities and it was condemnable that anti-social elements had ransacked it. “It’s highly condemnable that just because a poor man’s eatery is named after Puratchi Thalaivi Amma, it is ransacked. Even before swearing in, if they are behaving like this, it is worrying to think of the future. This incident is an example that DMK men will never reform,” claimed Mr. Dhinakaran in a tweet.