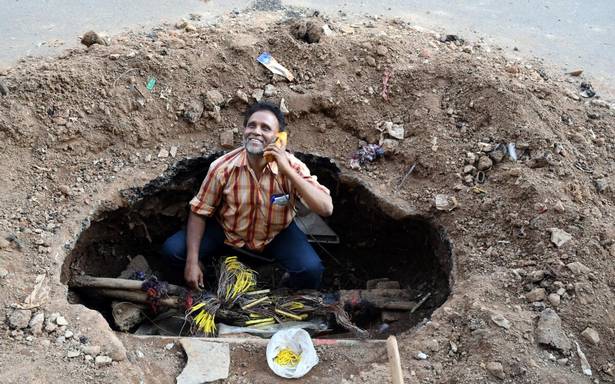 BBMP writes to Police Commissioner to cooperate in filing FIRs

The Bruhat Bengaluru Mahanagara Palike (BBMP) Chief Commissioner Gaurav Gupta has recently written to the City Police Commissioner seeking the latter’s cooperation in filing FIRs against those found to be digging up roads without requisite permission.

The High Court of Karnataka has been pulling up the BBMP over the poor maintenance of roads and deaths caused due to potholes.

In the letter, Mr. Gupta has stated that the civic body accords permission for road cutting/ digging to utility service providers. However, many take up digging without any permission from the BBMP, neither do they take up road restoration thereafter.

The civic chief has pointed that a young mother lost her life on January 30 while negotiating on a road that had been dug up by the Bangalore Water Supply and Sewerage Board (BWSSB) to provide drinking water and sewage pipelines.

Earlier, the court had also sought information from the BBMP on action initiated against service providers who had dug up roads without permission.

The court also was apprised by the advocate representing the petitioners of a PIL on poor maintenance of roads that in the recent past, nine persons had died in road accidents caused by potholes.

In light of these developments, Mr. Gupta urged the police commissioner to direct all police stations in the city to file FIRs based on complaints filed by the jurisdictional BBMP engineers against utility service providers who have damaged the roads.

Following the letter, the police commissioner’s office has issued a reminder to all the law-and-order police stations directing police personnel to immediately take action on the complaints filed by BBMP engineers.

On Tuesday, the civic chief chaired a meeting with senior officials to review the directions issued by the HC and the State government.