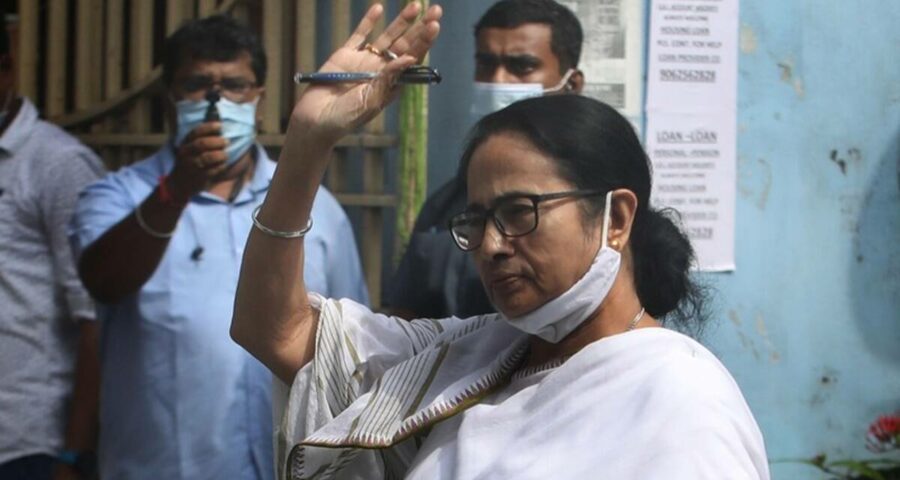 The CM’s visit to the constituency came on a day her BJP and Left Front rivals submitted their nomination papers for the September 30 election. Chief Minister and Trinamool Congress’s (TMC) Bhabanipur by-poll candidate Mamata Banerjee made a pit stop in the constituency on Monday, kickstarting her campaign in what is considered to be her party’s bastion.

Among other things, Banerjee visited a mosque in Khidirpur, and interacted with local people.

The BJP claimed that the visit to the mosque was not impromptu and indicated that Banerjee was “sweating” as she was not sure of her chances of winning the bypoll.

The CM’s visit to the constituency came on a day her BJP and Left Front rivals submitted their nomination papers for the September 30 election.

Banerjee, on her way back from state secretariat Nabanna around 4 pm, went to Kolkata Municipal Corporation’s Ward 77 area to talk to people and her party workers. She visited the area in Khidirpur where the 25 Pally Durga Puja is held, and also visited the Sola Ana Masjid accompanied by state minister Firhad Hakim. At the mosque, she interacted with imams. After stepping out of the mosque, Banerjee interacted with local people who had gathered to catch a glimpse of her.

At Ward 73, Banerjee went to a TMC meeting that was being addressed by senior leaders Partha Chatterjee and Subrata Bakshi. However, the chief minister did not participate in the meeting. The TMC chairperson is set to participate in a meeting with non-Bengali voters on September 16 at Uttam Udyan in the Padmapukur area of Ward 72.

Taking a dig at Banerjee, BJP national leader Amit Malviya tweeted, “If you thought Bhabanipur was a ‘no contest’ and Mamata Banerjee was confident of winning hands down, forget it.” He added, “She [Mamata Banerjee] is sweating. This visit to Sola Ana Masjid is not ‘sudden’ but a planned visit to seek votes from ward 77.”