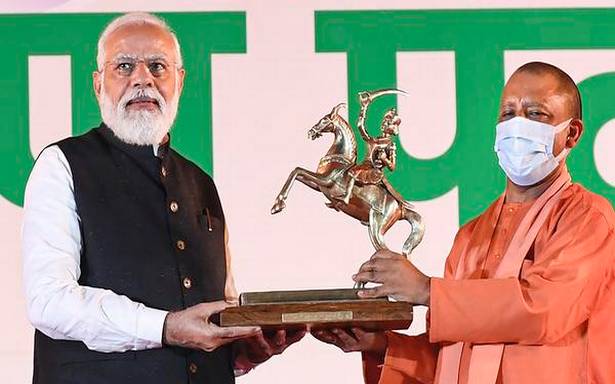 Violence perpetrated by Maoists, action against terror modules and cyber crime were some of the issues that figured prominently at the conference of DGPs in Lucknow on Saturday attended by Prime Minister Narendra Modi, officials said.

Union Home Minister Amit Shah, DGPs of all States and Union Territories, DGs of central police organisations and 350 other senior police officers attended the second day of the three-day conference.

The Prime Minister sat through the deliberations in the entire session on Saturday, an official said.

Since 2014, the Prime Minister has been taking a keen interest in the conference.

Unlike the symbolic presence earlier, he makes it a point to attend all sessions and encourages free and informal discussions that provide an opportunity to the officials to directly brief the Prime Minister on key policing and internal security issues affecting the country, another official said.

The conference, organised by the Intelligence Bureau, is being held in hybrid format. The DGPs of States and other police organisations attended the conference physically here, while the remaining invitees participated virtually from 37 locations.

As envisioned by the Prime Minister, since 2014, the annual conferences, used to be customarily organised in Delhi, have been organised outside with an exception in 2020 when it was held virtually.

There have been considerable changes in the format, topics covered, deliverables at the meet since 2014.

The number of business sessions and topics has increased significantly with focus on improving policing in service of people. Before 2014, deliberations largely focused on national security matters.

Since 2014, these conferences have a twin focus of national security and core policing issues, including prevention and detection of crime, community policing, law and order, improving police-image, etc., a Home Ministry official said.

Residing in the same premises over 2-3 days has served to build heightened sense of unity among all cadres and organisations since 2014.

Direct interaction of the top brass with the Head of the Government has resulted in convergence of views on crucial challenges faced by the country and emergence of doable recommendations, the official said.

Since 2015, detailed follow-up of recommendations of past conferences has been the norm and the topic of the first business session, attended by the Prime Minister and the Home Minister.