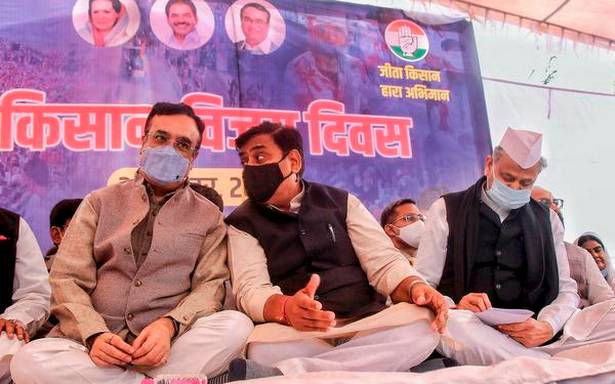 Swearing-in likely to be held on November 21; Sachin Pilot supporters could be inducted.

Ahead of a Cabinet reshuffle, all the Ministers in the Ashok Gehlot Government in Rajasthan tendered their resignations at a meeting of the Council of Ministers here on Saturday. The swearing-in ceremony for the new Council is likely to be held at the Raj Bhavan on Sunday.

Three Ministers holding important portfolios as well as the party posts had on Friday offered their resignations to Congress president Sonia Gandhi, while expressing their desire to serve in the party. Their offer to step down suggested that the Cabinet reshuffle will be based on a “one man, one post” formula.

“All the Ministers have resigned at the meeting,” Pratap Singh Khachariawas, who held the Transport portfolio, told presspersons outside the Chief Minister’s official residence. Govind Singh Dotasra, who had quit as Education Minister on Friday, moved a proposal, after which all the Ministers resigned, with Chief Minister Mr. Gehlot accepting their papers.

Ajay Maken, Congress general secretary in charge of Rajasthan, was present at the meeting. Mr. Khachariawas, who is also the Pradesh Congress Committee spokesperson, said the members of the Council of Ministers had been asked to reach the PCC headquarters at 2 p.m. on Sunday, where they would get further instructions.

“Those getting a ministerial berth may proceed from the PCC office to Raj Bhawan and take the oath of office. All of us work under the party’s central leadership and it is our duty to abide by the directions,” Mr. Khachariawas said.

Earlier in the day, Mr. Gehlot, along with Mr. Maken and Mr. Dotasra, addressed a “Kisan Vijay Divas” rally near the Civil Lines railway crossing in Jaipur. Mr. Gehlot said the BJP Government at the Centre had been “thoroughly exposed” after the announcement for repeal of the farm laws.

Mr. Maken, who had arrived here on Friday night, had announced the offer of resignation of three senior Ministers.

Besides Mr. Dotasra, the PCC president, the others are Health Minister Raghu Sharma, recently appointed All India Congress Committee in-charge of Gujarat, and Revenue Minister Harish Chaudhary, who was made in charge of Punjab. All the three are close confidants of Mr. Gehlot.

The swearing-in ceremony may witness the induction of some supporters of former Deputy Chief Minister Sachin Pilot, whose rebellion in July 2020 had threatened the Government’s stability. Apart from the Congress MLAs, Independents who supported the Government and former Bahujan Samaj Party MLAs, who merged with Congress to give it a comfortable majority, may also be included in the Council of Ministers.

Mr. Pilot, who was sacked as Deputy CM and PCC president after he rebelled along with 18 MLAs, has been demanding Cabinet reshuffle and political appointments for a long time. Both Mr. Pilot and Mr. Gehlot had separately met Ms. Gandhi in New Delhi last week to discuss the issue. Mr. Gehlot later gave indications about an early Cabinet reshuffle.