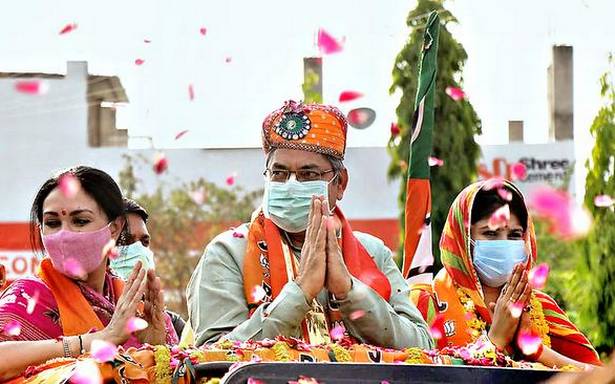 A robust development of infrastructure, matching with the nearby temple town of Nathdwara, through the mining sector and an effective utilisation of the District Mineral Foundation Trust (DMFT) connect the local populace with employment generation in Rajsamand. These are also the key factors during the campaign for the upcoming Assembly by-election here.

The southern Rajasthan district has about 1,500 quarries of marble, granite and minerals and their owners contribute ₹150 crore annually to the DMFT for the benefit of areas affected by mining-related operations. People’s resentment over under-utilisation of DMFT funds and diversion to other towns has prompted the ruling Congress to field mining industrialist Tansukh Bohra as its candidate.

On the other hand, Bharatiya Janata Party (BJP) candidate Deepti Maheshwari expects to carry forward the legacy of her mother, the late Kiran Maheshwari, who was elected from the constituency thrice between 2008 and 2018 and was a Minister in the Vasundhara Raje government. The BJP also hopes to get “sympathy votes” with the Maheshwari family member being in the fray.

BJP MP from Rajsamand Diya Kumari, camping in the town to address Ms. Maheshwari’s election rallies, told The Hindu that the Union government had been “responsive” to the demands raised in the constituency and had been doing its bit in different sectors. “The people here will once again repose faith in BJP. They are fed up with the Congress government, which has no clear policies or intentions,” she said.

The Congress has made an attempt to influence the local mine owners and workers with the credentials of Mr. Bohra. The mining baron, who enjoys a clean image, has been involved in philanthropic activities. Nitish Surana, managing Mr. Bohra’s election office, said the Congress candidate had made large contributions to the government hospitals and built several school buildings, besides developing the amenities at cremation grounds.

“There is no anti-incumbency wave in Rajsamand, even though the BJP has been traditionally winning this seat. Much will depend on how the Congress projects itself and influences the voters,” Ajay Singh, a youth from the nearby Kelwa village, said. Interestingly, the Congress has asked Mines & Petroleum Minister Pramod Jain to camp in the region till the polling day on April 17.

The Congress has also assured the voters that it would formulate a plan to develop the Chittorgarh-Rajsamand-Kumbhalgarh triangle as a new tourism circuit and widen the Khara feeder to bring more water to the historic Rajsamand lake, built by erstwhile Mewar ruler Rana Raj Singh in 1660.

Some controversial remarks made by senior BJP leader Gulab Chand Kataria, who is also the Leader of Opposition in the State Assembly, about legendary warrior king Maharana Pratap during the poll campaign earlier this week led to an embarrassment for the party.

As the Rajput outfits expressed an outrage, Mr. Kataria tendered an apology twice to the electorate.

Among the total of 10 candidates contesting in the constituency, the BJP faces a challenge from its rebel leader Suresh Joshi, who has entered the fray as an Independent in the name of protecting the honour of the region.