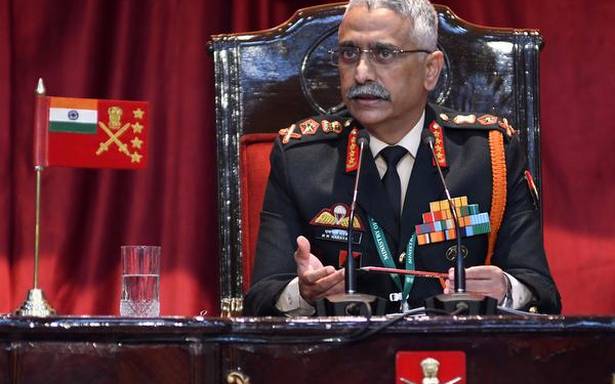 Talks are on with China at different levels that has helped build trust between two sides, he says

Army Chief Gen Manoj Naravane on Thursday said that with easy availability of drones, they would be increasingly used in all sorts of combat, both by state and non state actors, and capabilities were being developed to deal with them.

On the Ladakh stand-off, he said the situation on the ground had been normal since February and talks were on with China at different levels that had helped build trust between the two sides.

His comments came after the Sunday last explosions in the Jammu Air Force station, believed to have been carried out using drones, the first such attack in the country.

“We are seized of this problem. We have put in place certain measures. All our troops on ground have been sensitised for this evolving threat and we are developing capabilities to deal with that, whether by state sponsored or by states themselves. We are developing capabilities to deal with the drone threat both in the kinetic and non-kinetic realm,” Gen. Naravane said at a webinar organised by Global Counter-Terrorism Council (GCTC) in association with the Department of Defence Production.

He stated that they were catering to both the offensive use of drones and the defensive measures or the counter-drone systems to prevent attacks on any critical installations whether by state or non state actors.

On the stand-off in Eastern Ladakh, he noted that the situation had been normal for quite sometime since the disengagement in February last from the northern and southern banks of Pangong Tso (lake) as well as the Kailash ranges. “Since then, both sides have strictly adhered in letter and spirit to the disengagement that was agreed upon,” he observed.

The two sides were engaged at different levels – political, diplomatic and military. Even at the military level, they were engaged at different levels, from the highest commanders down to the delegation level. “This has helped build trust between the two sides and going ahead we are sure we will be able to resolve all the remaining issues,” he added.