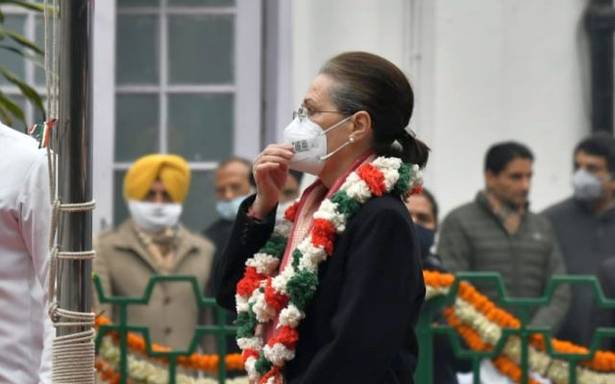 The Congress president made these remarks during the party’s 137th Foundation Day in Delhi.

Congress president Sonia Gandhi on Tuesday, December 28, 2021, said divisive ideologies anchored in hate and prejudice were making every effort to weaken the firm foundation laid down by party leaders over the years to develop a strong India.

In a message to Congress workers on the party’s 137th Foundation Day, Ms. Gandhi said, "History was being falsified and detestable efforts were being made to erase the ‘Ganga-Jamuni’ culture of the country." She vowed that the Congress shall not remain a mute spectator and will not allow anybody to destroy the rich heritage of the country.

“Divisive ideologies anchored in hate & prejudice and which had no role whatsoever to play in our freedom movement are now causing havoc on the secular fabric of our society,” Ms. Gandhi said.

Also read: For us, the cow is mother, and is sacred, says Prime Minister

Ms. Gandhi’s remarks come at a time when a section of fringe Hindu religious leaders have hurled abuses at Mahatma Gandhi and hailed his assassin Nathuram Godse as the symbol of truth and religion.

“They are rewriting history to give themselves a role they do not deserve. They inflame passions, instill fear and spread animosity. The finest traditions of our parliamentary democracy are being deliberately damaged,” the Congress president said.

“Let there be no doubt on our steadfast resolve. We have never and we will never compromise on our fundamental beliefs that are part of our glorious legacy,” she said.

“Electoral ups and downs are inevitable but what is enduring and lasting is our commitment to the service of all people of our diverse society,” Ms. Gandhi said, adding that the party will make every possible sacrifice to counter these “anti-people conspiracies”.