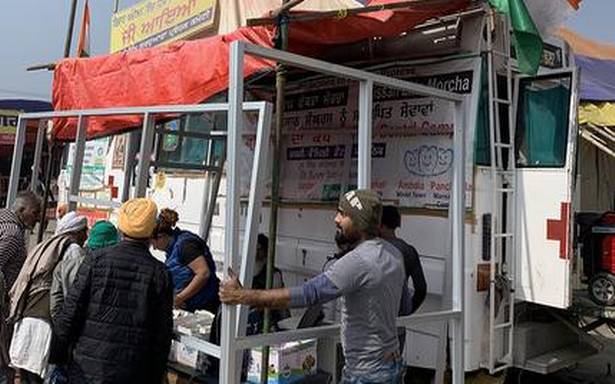 The free dental clinic at the Singhu border protest site, which has been running since the agitation began, is set to become one of the first facilities to instal air conditioners to beat the heat.

On Saturday, the clinic started installing semi-permanent structures that will act as a waiting room for patients as well as a stall from where free medicine will be distributed.

Sarabhjit Kaur, a volunteer at the dental clinic said, “We have been providing services since the very beginning. Due to the gradually changing weather, it has become very difficult to distribute medicines in the open. So we decided to build a structure out here where we will instal air conditioners. This space will also act as a waiting room for the patients and they will not be exposed to direct sunlight.”

The farmers’ agitation against the Centre’s three farm laws is now a few days short of the three-month mark. The past couple of months saw the protesting farmers brave the harsh winters and remain stationed on the highway.

Other medical camps and the 24X7 hospital which is functional at the border said that there were plans to add layers of cloth above the existing tents to provide respite from the heat.

Jagter Singh, a volunteer at the hospital run by Life Care Foundation said, “As of now, it is only in the afternoons that the mercury is rising so we have been able to manage well. However, once the temperature rises further, we will put another layer of fabric above the tents to bring down the temperature within the tents.”

“We will not be able to put air conditioners as it is an open tent. However provisions for coolers can be made. We have another similar set-up a few kilometres away from the main stage. Even there, same arrangements will be done above the tents to ensure respite from the heat,” added Mr. Singh.

Shahjahan, another staff nurse at a medical camp near the main stage said, “A week ago, we got fans installed inside the tents. As and when the need arises, similar provisions will keep getting added.”

Earlier in the day, Nihang Sikhs took out a march demanding the release of those arrested for the Republic Day violence, including Deep Sidhu.

Gurbaaj Singh from Amritsar said, “For the last few months we have been here fighting not just for the farmers but for the labourers as well. It seems like the government is on a mission to privatise everything. There is not a shred of democracy left in this country, especially the manner in which people were arrested after the January 26 incident.”

“People got arrested without any cause whatsoever. What had Deep Sidhu done? The national flag was never touched and in fact the other flag is simply our religious symbol,” said Mr. Singh.

In another development, concertina wires were put up near the second barricade at the Singhu border, which is nearly a kilometre away from the main stage.