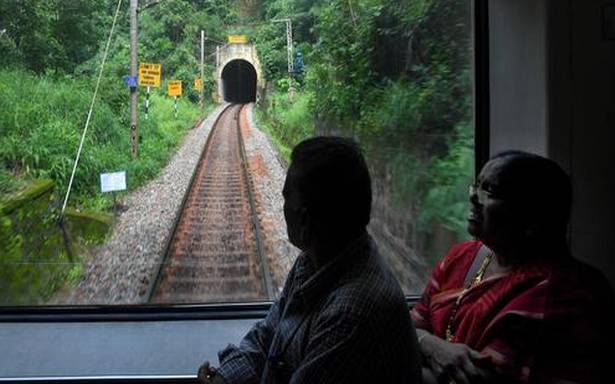 Thanks to the indifference of the Railways, the new Vistadome coaches sanctioned for the Araku passenger train are confined to the coach depot for over a month depriving tourists of a pleasant experience and the railways of revenue during peak season.

The Divisional Railway officials had planned to use the coaches before tourist rush to Araku peaks. It normally begins with Dasara and continues till Sankranti (Jan. 15). A trial run of the LHB (Linke Hofmann Busch) rake was conducted from Visakhapatnam to Araku during the second week of October. Divisional Railway Manager Anup Satpathy told The Hindu last month about the plan to run the train with the LHB rake as the new Vistadome coaches were of LHB type.

The Divisional Railway officials are said to have made all-out efforts to run the train with the new coaches before Dasara but in vain.

Visakhapatnam MP M.V.V. Satyanarayana has written to Railway Minister Ashwini Vaishnaw to inaugurate the LHB train with Vistadome coaches at the earliest for the convenience of tourists who visit Araku from Odisha, West Bengal and Chhattisgarh apart from A.P. during the Dasara and winter vacation. He noted that there was a long pending demand from the people of Visakhapatnam for introduction of an LHB train with Vistadome coaches.

Tourism Minister Muttamsetti Srinivasa Rao told The Hindu that he would take up the issue with the East Coast Railway (ECoR) General Manager.

“The new coaches should be operated without any further delay as Dasara and Deepavali are already over and the railways have lost a huge revenue. Any railway employee can be asked to flag off the new coaches, if the railway officials do not have time for it,” said N. Gajapathi Rao, a former ZRUCC Member.

“The Railway Minister is unable to take time off his busy schedule to flag off the new coaches,” according to railway sources.