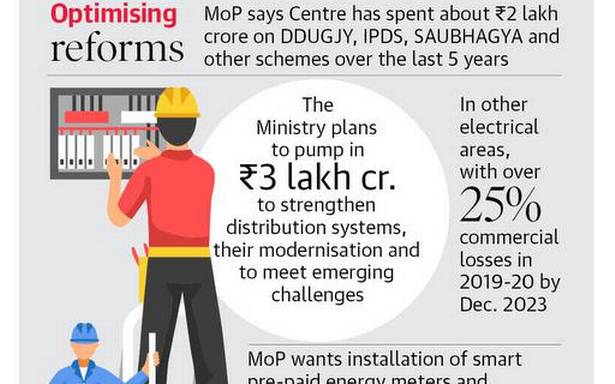 In yet another significant move to improve accountability and transparency among the power utilities, particularly distribution companies (discoms), as part of reforms the Ministry of Power (MoP) told the State Governments recently to set up District Electricity Committees (DECs) to have an oversight over all power schemes of the Centre and their impact on services to consumers.

The committees would also have to ensure involvement of people in the process of power sector reforms. The committee would also ensure a role to elected representatives in taking decision related to power transmission and distribution at district level.

The fresh move is part of a series of decisions unveiled by the Centre in recent months to push reforms such as making discoms to give-up management of 33 KV transmission network as part of their distribution business to reduce commercial losses, downsizing the revenue sources with green energy open access policy to all consumers with consumption of over one megawatt power (1,000 units of energy a day) and to improve the viability of discoms by making it mandatory to install pre-paid energy meters to all consumers by March 2025.

“On one hand, all these measures appear appropriate to make Discoms viable as most of them are in heavy losses due to commercial losses and short-funding of subsidies by the governments. On the other, the measures clearly indicate the possibility of privatisation of distribution business at field level, not necessarily at discom level – at sub-station or even lower level”, a senior executive of the Southern Discom said.

The DECs are mandated to meet at district headquarters at least once in three months to review and coordinate overall development of power supply infrastructure in accordance with the Centre’s schemes.

Further, the committees are mandated to review development of sub-transmission and distribution network including regular operations and maintenance of network, identifying further areas where strengthening is needed, impact of the works on quality and reliability of power supply, standards of performance and consumer services, complaints and grievance redress system and others.