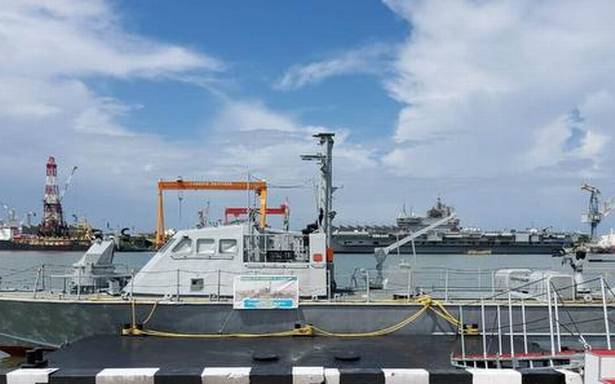 Vessel was deployed for coastal security and port defence missions

The decommissioned Fast Attack Craft (IN FAC) T-81 of the Indian Navy, which was the second of the Super Dvora MK II Class fast attack craft built by Goa Shipyard Limited, was handed over to the State government by Vice Admiral A.K. Chawla, Flag Officer Commanding-in-Chief (FOC-in-C) of the Southern Naval Command at the Naval Base here recently.

The ship will be part of the Port Museum under the Alappuzha Heritage Project. This exemplifies the importance the Indian Navy attaches to the people of Kerala and the maritime town of Alappuzha, which was once called the “Venice of the East”, a Navy release said.

The vessel was commissioned into the Navy in 1999 by the then Governor of Goa, Lt. Gen. (Retd) J.F.R. Jacob. It has a displacement of 60 tonnes and could attain a maximum speed of 45 knots (85 kmph) and could cover a range of 600 nautical miles. The hydrodynamic design and state-of-the-art machinery gave the vessel optimum utilisation of power and suitability for shallow water operations. It was fitted with OERLIKON 20 mm gun with Typhoon system.

The ship was attached to Western Naval Command and had participated in many coastal security and port defence missions along the Maharashtra and Gujarat coast. The roles of the ship included day/night surveillance and reconnaissance, coordinated search and rescue operations, beach insertion, extraction of marine commandos and high-speed interception of small, manoeuvrable intruder craft. It also participated in para jumps and duck drops with Indian Air Force personnel embarked onboard.

The FAC was decommissioned in January in Mumbai and towed to Kochi earlier this month.