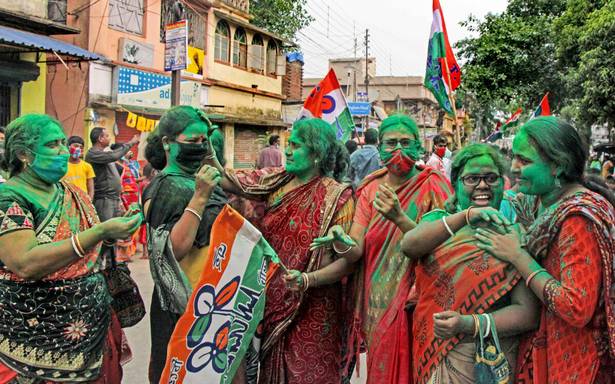 TMC upped its vote share substantially in phases 7 and 8 that were held in late April. Polls during these phases were held in the Greater Kolkata region

Contrary to what opinion and exit polls claimed, the All India Trinamool Congress (TMC) not only won nearly 3/4ths of all the Assembly seats, it did so by improving upon its vote share in both the 2019 Lok Sabha and the 2016 Assembly elections. The BJP’s vote share compared to 2019 fell by around 3% points while the Left-Congress combine’s vote share and seat tallies crumbled even more compared to 2016 and 2019. The TMC was particularly dominant in the Greater Kolkata region and did well in the urban areas with a vote share more than 50%. The BJP managed to win substantially among seats reserved for STs and also did well in seats which had a substantial chunk of voters deriving income from farming. The Left-Congress combine’s low vote share (7.6%) suggests that some of its traditional voters had shifted their votes to the TMC.

The map depicts the seat-wise winners in the 2021 election.

The Trinamool Congress’ best performance was in the Greater Kolkata region, while the BJP came closest to the TMC only in the northern region.

TMC upped its vote share substantially in phases 7 and 8 that were held in late April (during the COVID-19 2nd wave). Polls during these phases were held in the Greater Kolkata region.

In seats with a large chunk of farmers, TMC’s vote share was only ahead of that of the BJP’s.

The Trinamool Congress won substantive vote shares in both the rural and urban areas. Only in the semi-rural areas did the BJP come close to the former’s vote shares.

The BJP did better only in the ST-reserved seats compared to the TMC, which did far better in the general and the SC-reserved seats.

With nearly half of the seats won by the TMC having a victory margin of more than 15%, the contest was clearly not close with the BJP.

The TMC secured more than 50% vote share in more than half of the seats it won, suggesting the emphatic nature of its victory.