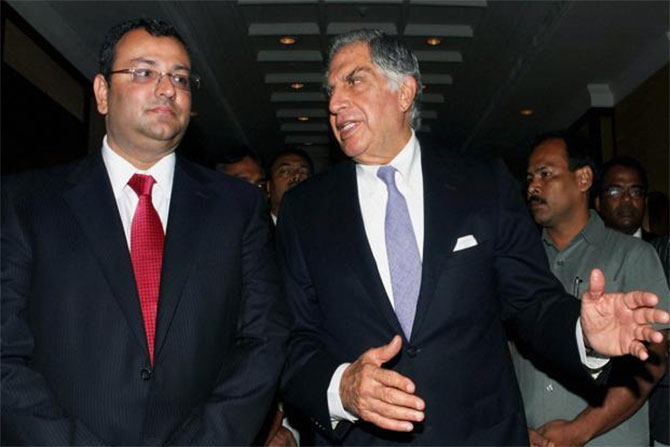 ‘Not many know that Ratan Tata became chairman of Tata Sons because of Cyrus’s father Pallonji Mistry. But he (Cyrus) never leveraged it to his benefit.’

Girish Kuber is the author of The Tatas: How a Family Built a Nation and a Business.

“Unlike JRD or Ratan Tata, Cyrus was a man of numbers,” Kuber — who also edits Loksatta, the Marathi newspaper published by the Indian Express Group, tells Prasanna D Zore/Rediff.com about former Tata Sons chairman Cyrus Mistry who died tragically in a road accident on Sunday afternoon.

As a person he was absolutely humble; totally down to earth. Never would anyone have realised that the person you are speaking to happens to be Cyrus Mistry. He would never throw his weight around; absolutely down to earth, a trait common among someone who grew up in a typically traditional, God-loving, Parsi family.

As a person, he was a truly humble. In fact, Cyrus Mistry was humility personified. It would even reflect in his sartorial styles: Cotton trousers, shirts, etc.

At the personal level, he was a strictly private person. Never part of Page 3 parties. But this is typical of the entire Mistry family. Despite being one of the wealthiest families they showed characteristic humility.

He would never flaunt (his wealth), would always be low profile. Extraordinarily honest and law-abiding; would never break even traffic rules.

Never got his due

Look at his life as a businessman. Despite having the single largest shareholding in Tata Sons (the conglomerate that runs the Tata business empire) he never got his due.

Some of the issues he raised about the way it (Tata businesses) was being run were corrected and even today those are being followed and respected across Tata businesses.

Unfortunately, he had to leave (as chairman, Tata Sons) in very sad circumstances. Cyrus Mistry never got his due.

The Mistry family, perhaps being so very low profile, not so visible, not many people know about their contributions. How many people would know that a building like the World Trade Centre in Mumbai was built by the Mistrys?

Not many know of their magnificent contribution to the infrastructure they have built in India. The quality of that infrastructure, the principles they followed for building such infrastructure has always been unseen in the Indian context.

That even small businesses with some success flaunt it to the media, amplify their glories is something that never happened with the Mistrys. Cyrus too followed this rule to the tee. Not many people know about the contributions of the Mistry family to India’s business environment.

For example, not many people would know that Ratan Tata became chairman of Tata Sons because of Cyrus’s father Pallonji Mistry. But he (Cyrus) never used it or leveraged it to his benefit.

Unlike JRD (Jehangir Ratanji Dadabhoy Tata, the legendary chairman, Tata Sons from 1938 to 1991) or Ratan Tata, who wanted to create something of their own, were visionaries, Cyrus was a man of numbers.

Cyrus brought about a generational change in the Tata (Sons) structure. With his style of conducting business he might have raised questions about the ownership structure (of Tata Sons), the trust that owns the entire conglomerate, could have been the bone of contention between the traditional Tata family and Cyrus Mistry.

Mistry’s generation believed and focused on numbers, profitability, P&L (balance sheets). That could also be one of the reasons for their (Cyrus and Ratan Tata’s) relationship going sour.

Their styles of running the conglomerate were quite different. Now that Cyrus Mistry is no more, there is no point in labouring the point.

I happened to meet Cyrus Mistry while preparing my book. He never made you feel that he was running the Tata empire. He would never behave as God’s Chosen Person.

The interesting thing about Cyrus Mistry was that he was a great listener. A man of few words. He would want people to speak to him. He would want to grasp what exactly is people’s point of view.

He was never an extrovert in expressing his personal or political views.

There was warmth (when someone met him), but there was a regal aloofness also.

But that is true of the entire Mistry family, about JRD and Ratan Tata as well.