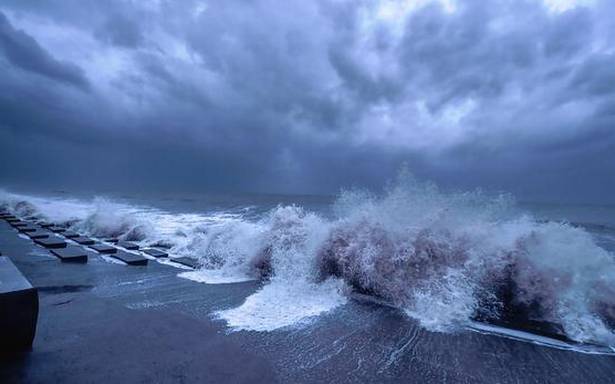 Several thousand people in coastal districts of Odisha are bracing for the impact of the very severe cyclonic storm, Yaas, which is set to hit the coast with wind speeds of 155-165 kmph early on Wednesday morning. The State government has moved over two lakh people from vulnerable areas to safety.

In neighbouring West Bengal, Chief Minister Mamata Banerjee said about 11 lakh people have been evacuated and given shelter in 4,000 cyclone shelters of the State. Ms Banerjee said that there were reports of localised tornadoes at two places Halisahar in Nadia and Chinsurah in Hooghly district of the State.

In view of the weather conditions, Kolkata Airport has decided to suspend flight operations from 8.30 a.m. to 7.45 p.m on Wednesday.

According to the India Meteorological Department (IMD), the cyclone was intensifying and moving north-northwest and is likely to make a landfall near north Odisha coast very close to Chandbali-Dhamra port. According to the IMD wind speeds would further increase to 155-165 kmph over northwest Bay of Bengal and along and off north Odisha and adjoining West Bengal coasts including Jagatsinghpur, Kendrapara and Bhadrak, from early morning of May 26.

The system will extend to Balasore district of Odisha from the forenoon of May 26. Tidal waves of height 2-4 meters are likely to inundate low lying areas of, Balasore, Bhadrak and about 2 meters above tide are likely to hit coastal areas of, Kendrapara and Jagatsinghpur Districts around the time of landfall.

“We had started the process of evacuation from Monday. As of now, more than 2.5 lakh people have been evacuated and the process is going on,” said Pradeep Kumar Jena, Odisha Special Relief Commissioner, addressing a press conference here.

The government said it was prepared for landfall near Bhitarakanika, Dhamra and Chandbali. It added brought new areas such as parts of Dhenkanal, Angul and Sundargarh districts under disaster management operations along with Balasore, Bhadrak, Kendrapara, Jagatsinghpur, Mayurbhanj, Keonjhar and Jajpur.

Tuhin Ghosh, director of the School of Oceanographic Studies, Jadavpur University said that storm surge is a matter of concern because the cyclone will coincide with the full moon tide and the water level in the seas and river may rise further leading to breach of embankments.