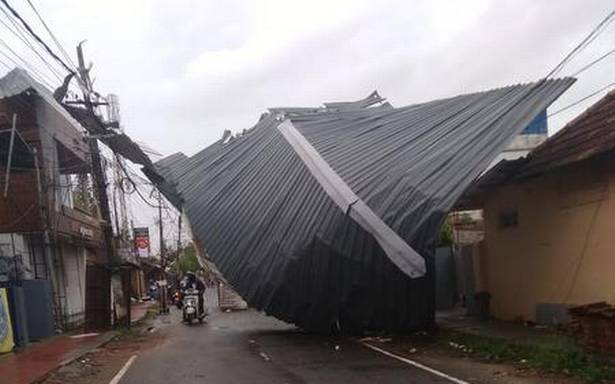 Officials said that a total of 50 people were shifted to the camps as of May 15 morning.

With heavy rains and sea erosion continuing to wreak havoc in different parts of Alappuzha, the district administration opened two more relief camps in Thrikkunnapuzha and Arattuppuzha. It opened two camps in Kadakkarappally and Thamarakulam earlier.

Officials said that a total of 50 people were shifted to the camps as of May 15 morning.

Sea erosion is severe in the coastal parts of Cherthala, Ambalappuzha, and Karthikappally taluks. At least 10 houses were destroyed or damaged at Ottamassery in Kadakkarappally grama panchayat. Several families affected by sea erosion have moved to their relatives’ homes after water entered their homes.

Strong winds that lashed Alappuzha town and other parts of the district on May 14 night uprooted trees. Several houses were damaged after trees and branches fell on them. Power supply has been hit in several places.

“A large number of houses have been damaged after uprooted trees and branches fell over them. We are yet to ascertain the extent of damage and total loss,” said a revenue official.

The Irrigation department has opened the mouth of Thottappally pozhi to ensure smooth flow of flood water from Kuttanad into the sea. It also opened shutters of the Thanneermukkom bund.

A 24-member National Disaster Response Force (NDRF) team that reached the district on May 14 has been deployed to areas affected by coastal erosion in Cherthala taluk.