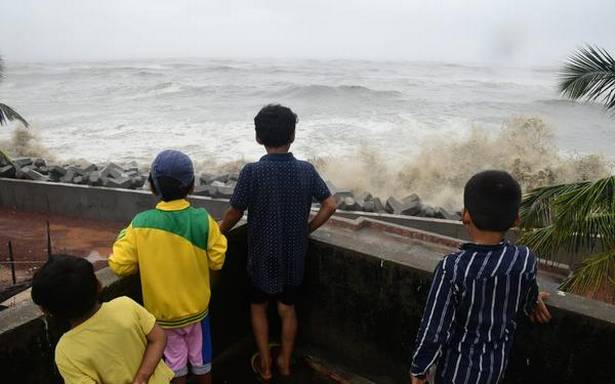 IMD predicts the cyclone turning to be a very severe cyclone by May 18 hitting Gujarat coast.

Cyclonic storm Tauktae (pronounced as Tau’Te) hit the Karnataka coast on Friday night with the region continued to witness heavy rains coupled with gusty winds since then.

The Arabian Sea has become very rough over the region with waves reaching up to 4.2mt height. Many parts prone to sea erosion witnessed further erosion along the Karnataka coast including Someshwara and Uchchila in Dakshina Kannada, Hejmady, Padubidri, Gangolli, Maravanthe, Koderi and Dombe in Udupi district. Heavy rains however did not cause any flooding in the region as yet.

Though the Dakshina Kannada district administration had removed the weekend curfew aimed at curtailing the further spread of COVID-19, people found it extremely difficult to buy the essentials before 9 a.m. amid the pounding rain. Interior areas of the twin districts too received heavy rains along with the coastal region.

According to a bulletin from India Meteorological Department, coastal Karnataka and adjoining Ghat districts would receive moderate rainfall at most places with heavy to very heavy rainfall at a few places on Saturday and Sunday. Kerala and Karnataka coasts would also witness squally wind speed reaching up to 70 kmph on Saturday.

IMD said the cyclonic storm Tauktae over East central and adjoining Southeast Arabian Sea and Lakshadweep area moved nearly North-Northwest with a speed about 9 kmph during the past six hours. The storm laid centred about 160km North-Northwest of Amini Divi, 350km Southwest of Panaji and 960km South-Southeast of Veraval and 1,050km South-Southeast of Karachi. It was very likely to intensify further into severe cyclonic storm during the next 12 hours and very severe cyclonic storm in the subsequent 12 hours. It is very likely to cross Gujarat coast between Porbandar and Naliya on May 18 afternoon/evening.

District administrations of Dakshina Kannada and Udupi had geared up to face the cyclonic storm by keeping machinery and officials alert throughout and issuing warnings to general public. The Coast Guard and the Coastal Security Police have kept constant vigil on the Sea even as fishermen on high seas were shepherded to the coast.