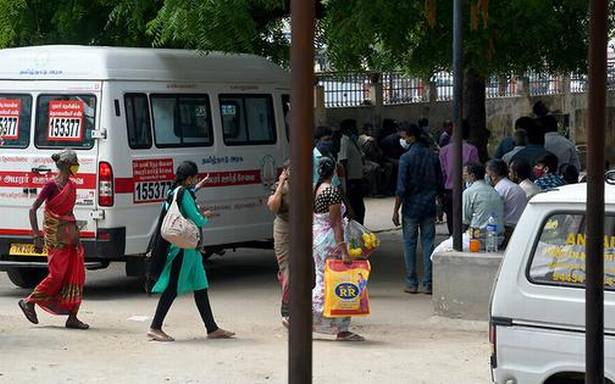 Over the past week, staff at two electric crematoria in the city — Thathaneri and Moolakarai — have been overburdened, attending to an increasing number of COVID-19 deaths.

While crematoria have been witnessing long queues due to an increase in COVID-19 deaths, the State’s health bulletin does not reflect the surge in Madurai.

According to City Health Officer P. Kumaraguruparan, the bodies of COVID-19 patients or those suspected to have had the infection are cremated at the electric crematoria at Thathaneri and Moolakarai. People are allowed to take the bodies of COVID-19 patients to their villages for cremation only after obtaining a ‘no-objection certificate’ from the respective health inspectors, he said.

Sources at the Thathaneri crematorium said there was only one functional gasifier there. The second gasifier, repaired recently, would be commissioned after a trial run in a few days, a Corporation source said.

Currently, on average, 25 bodies of COVID-19 patients are attended to at the Thathaneri crematorium every day, when compared to last week, when 17 bodies were cremated. “Around 40% of the bodies are of residents of Madurai and the rest are from other districts,” a source said.

Similarly, there has been an increase in the number of bodies attended to at Moolakarai. According to a source, around 10 bodies of COVID-19 patients are attended to every day.

But there is a mismatch between the bodies cremated at these crematoria and the deaths recorded in the health bulletin.

Dr. Kumaraguruparan said patients from neighbouring districts like Theni, Dindigul, Ramanathapuram, Sivaganga and Virudhunagar were coming to the Government Rajaji Hospital and major private hospitals in Madurai for COVID-19 treatment. “To handle the additional number of bodies, it has been instructed that both crematoria should function round the clock,” he said.

When asked if COVID-19 deaths were under-reported in the bulletin, he said RT-PCR tests are being conducted on all undergoing surgery or other procedures at hospitals. “While they may test positive for COVID-19, the cause of death might be other reasons. In such cases, the bodies are cremated following COVID-19 protocol, but such deaths might not figure as COVID-19 deaths in the bulletin,” he added.