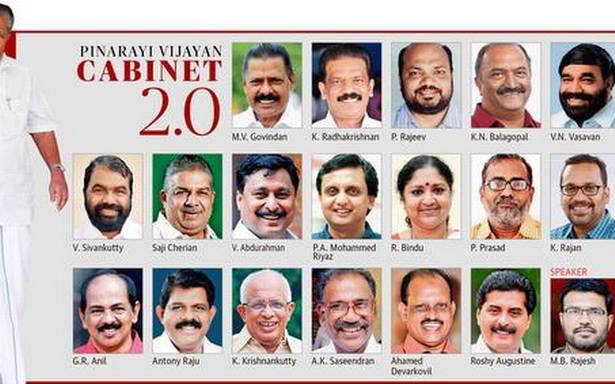 The Communist Party of India (Marxist) State committee in Kerala on Tuesday dropped high-profile ministers K.K. Shailaja, Kadakampally Surendran and A.C. Modieen from the new Pinarayi Vijayan Cabinet. The party has nominated Ms. Shailaja as the party’s whip in the next Assembly.

Ms. Shailaja’s non-inclusion in the Cabinet has raised several eyebrows. The Health Minister in the out-going ministry has been seen as the face of Kerala’s fight against the Nipah virus and later the COVID-19 pandemic. Her handling of the crisis saw Ms. Shaiaja post a historic win of 60,000 votes over her rival from Mattannur in Kannur.

Ms. Shailaja, however, denied allegations that the CPI(M) had singled her out for exclusion from the Cabinet, saying the party had collectively decided to rotate responsibility.

Not surprisingly, the CPI(M) nominated Mr. Pinarayi Vijayan as the legislature party leader and consequently Chief Minister-designate. The party also tasked Mr. Vijayan with assigning portfolios to the Ministers-designate.

The party has included two women legislators in the next Cabinet. They are former Thrissur Mayor R. Bindu and Veena George. Ms. Bindu is the wife of CPI(M) acting State secretary A. Vijayaraghavan. The party has proposed M.B. Rajesh for the Speaker’s post.

Speaker candidate M.B. Rajesh told newspersons that the party paved the way for a new set of party leaders to gain legislative and administrative experience. The next Cabinet was a mix of youth and experience. It also reflected Kerala’s social diversity, he said.

CPI(M) Polit Bureau member M.A. Baby echoed the sentiment, saying the party had paved the way for a fresh crop of legislators to gain administrative experience adding that the decision was no reflection on the performance of the previous Cabinet. The people’s vote was for the Left Democratic Front’s manifesto and no particular individual, he said.

Mr. Vijayan has also indicated that it would be his final term as Chief Minister.