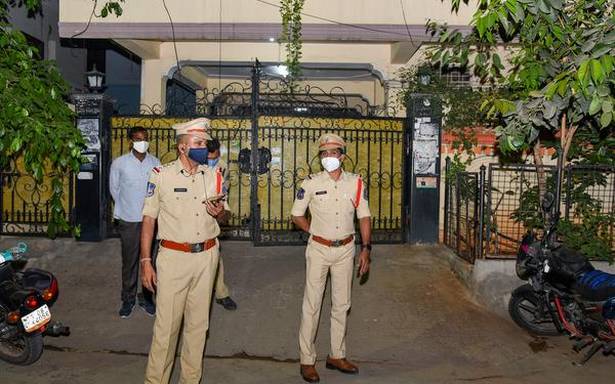 Case pertains to furthering the activities of proscribed CPI (Maoist)

The National Investigation Agency has conducted searches at 31 locations in Andhra Pradesh and Telangana in a case related to furthering the activities of the proscribed CPI(Maoist), an official said on Thursday.

The case relates to furthering the activities of the proscribed CPI (Maoist) in Andhra Pradesh in the guise of frontal organisations, the official said.

The case was originally registered in November 2020 at Visakhapatnam (Rural) district and was re-registered by the NIA in March.

The case pertains to the seizure of revolutionary literature of CPI (Maoist), press notes, medicines, wire bundles and explosives substances from Pangi Naganna, who was intercepted by the police in Visakhapatnam Rural during vehicle checking.

Naganna had been ostensibly working as a journalist and was passing information about the police movements to CPI (Maoist) leaders.

The NIA on Thursday questioned at least four persons, on whose houses they had conducted raids on Wednesday, in Visakhapatnam.

The raids were conducted till the early hours on Thursday and it is learnt that some documents pertaining to fact-finding on alleged encounters, press notes and other documents, computer hard disks and external disks and cellphones were seized for examination.

The raids were conducted at the houses of Chalam of All People’s Lawyer Association, V.S. Krishna of HRF, Padma of CRPC and Sreeramurthy and Balakrishna of APCLC.

It is learnt that Mr. Krishna, Mr. Balakrishna, Mr. Chalam and Mr. Sreeramurthy were asked to present themselves before the investigating officers from the NIA, at their camp office on Thursday. Both Mr. Krishna and Mr. Balakrishna had also been told to be present on Friday.

The raids were conducted as part of the Munchingput and Pidigurala cases, taken over by the NIA.

In the Munchingput and Pidigurala cases, Naganna and Chaitanya were arrested and both had named over 60 persons who have alleged connections with the CPI (Maoist). FIRs were filed against all under the UAPA.

Already nine persons, including Naganna, Chaitanya, Andaluri Annapoorna and a few others have been arrested.

The NIA on Wednesday had conducted raids at homes of almost all the 64 persons whose names were mentioned in the Munchingput and Pidigurala case, across Andhra Pradesh and Telangana. It is learnt that no fresh arrests were made after the recent raids, but they were called for questioning.

(With inputs from our Vijayawada staff reporter)