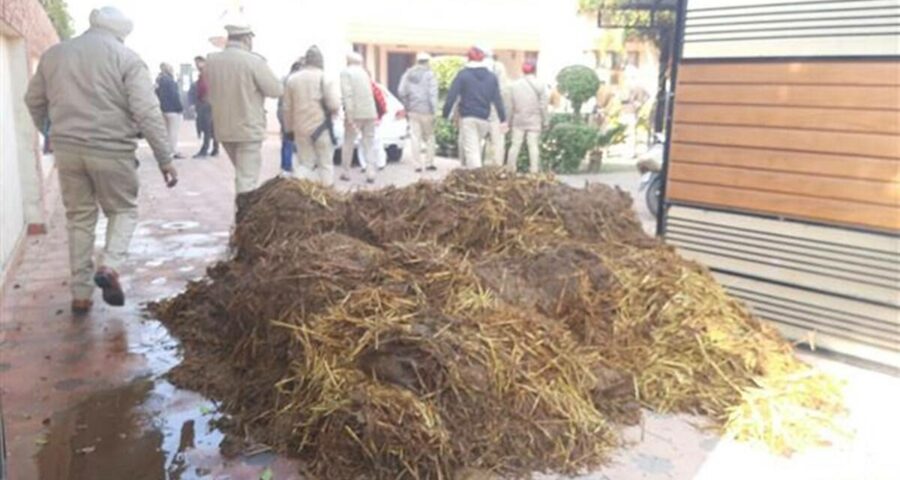 In a statement, the Chief Minister said that the SHO had gone overboard in registering a case under Section 307 of the IPC. “There was no attempt to murder,” he said. Amarinder, who holds the Home portfolio, also ordered transfer of the SHO who had registered the ‘attempt to murder’ case, which is now being probed by a Special Investigative Team .

In a statement, the Chief Minister said that the SHO had gone overboard in registering a case under Section 307 of the IPC. “There was no attempt to murder,” he said, referring to the Hoshiarpur incident, in which a group of protestors had unloaded a trolley full of cow dung in front of former Punjab minister Tikshan Sud’s residence.

BJP condemns toning down of FIR

Expressing deep concern over the manner in which BJP leaders and workers were being targeted and threatened with physical harm, senior BJP leadership hit out at CM Amarinder Singh for toning down of the FIR against those who threatened BJP leader Tikshan Sud in Hoshiarpur.

“How much more blatant can the Chief Minister of a state get? Capt Amarinder has not only got the section in FIR against attackers of Tikshan Sud changed but has also transferred the concerned SHO for doing his job. Na khata na bahi, jo Captain kahe vo hi sahi (All records are useless, only what Captain says is right),” said Chugh.

The senior BJP leader said the national leadership of the party is very perturbed at the manner in which a free hand has been given to anti-social elements to attack party office bearers and workers in the garb of farmers’ protest.

“On one hand the Chief Minister is allowing the Punjab Police to remain mute spectators and aid and abet the anti-social elements to run amok in the state and if the police does its job for a change then the SHO is transferred. Am I then wrong in saying that urban naxals are running riot in Punjab,” asked Chugh.

Reacting to the development, Tikshan Sud said everything that had happened with regard to the attack on his house and now the decision to change the sections used in the FIR was stage managed by the state government.

“Everything is stage managed by the government. I do not get any fun out of getting FIRs registered against anyone. The persons who had come to my house had tried to run over a BJP worker with their tractor. The SSP at the time had said that said he was satisfied with the proof he had seen and only then was the FIR registered. That day Amarinder had given statement that such actions should not be done,” said Sud.

Sud said the state government was not acting against those who were creating law and order problems. “Punjab is being pushed into dark ages. Separatist slogans were used when the incident took place at my house. Our commitment is for peace in Punjab. All this will not only cost the Congress, but Punjab also. It is not individuals like me who matter. There are so many things happening against me which I do not want to comment upon,” said Sud.

Former Union minister Vijay Sampla said that now it has been proven that the deterioration in law and order and the attack on Tikshan Sud had been orchestrated by the Punjab government under Chief Minister Capt Amarinder Singh.

“The state government is supposed to maintain law and order. But the reverse is happening in Punjab, The opposition is respecting the law and order while the ruling party is hell bent on spoiling it. Their MLAs were also saying that they are the ones who are getting everything done in Punjab with regard to protests. Now it is proven that Captain is getting it done,” said Sampla.

Sampla added that Congress government was conspiring against peace in Punjab. “Earlier Congress was doing this in a hidden manner now it has come out in the open,” he said.

The Chief Minister, meanwhile, termed as correct the arrest of Punjabi singer Shree Brar for promoting gun culture in a music video. Promoting gangsterism and gun culture in this manner was absolutely wrong, he said, adding that the case had been registered correctly in the matter which related to an old song of the singer.

Amarinder made it clear that the arrest had no connect with the singer’s video in support of the protesting farmers, which in fact was appreciable. However, his good work now could not condone the negative impact of his old song encouraging youth to pick up guns, he said. Noting that Punjab was a border state facing ongoing threats from across the border, the Chief Minister said: “We will not allow the state’s peace to be disturbed in any manner” which such acts had the potential to do.