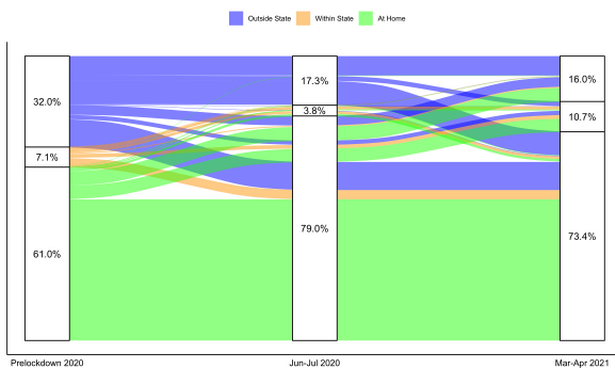 A survey of young, semi-skilled migrants from rural Bihar and Jharkhand in April 2021 has found that last year’s lockdown led to an informalisation of labour among men, while most of the women simply dropped out of the work force altogether.

It also found that the number of out-of-State migrants halved between March 2020 and 2021, with no net effect of re-migration post lockdown. This meant the majority of these young workers were stuck in their home districts when the second wave of COVID-19 struck rural areas, and have poor chances of regaining formal, salaried work without policy interventions, according to researchers from the Abdul Lateef Jameel Poverty Action Lab (J-PAL) and the University of Warwick.

The survey tracked more than 2,200 young people, who were trained under the Centre’s Deen Dayal Upadhyaya Grameen Kaushalya Yojana (DDU-GKY) in 2019, over five rounds. The youth were from families below the poverty line, but all had some high school education, with half having completed Class 12. A third were from Jharkhand, and the remainder from Bihar.

More than half of those surveyed were women, and more than 60% were from Scheduled Tribes or Castes. They received training for semi-skilled jobs, and the majority of those placed were in the apparel or garment-making sector, earning a salary of about ₹7,000 to ₹10,000 per month.

However, when the lockdown hit, jobs were lost and workers forced back home. By June-July 2020, only 17% of the trainees were still out of State, while almost 80% were back in their home districts. In March-April 2021, the number of out of State migrants was still lower — only 16% — showing low levels of re-migration.

Among men, on the other hand, 29% were initially out of State. During the lockdown, most went home, leaving only 12.5% as migrants. By April 2021, however, a small fraction had re-migrated, raising the out of State figure to almost 18%.

The percentage of women in salaried jobs halved from 42% to 20% over the course of the year. The number in informal work rose from 3% to 12%. However, the vast majority — almost 70% — were jobless by April 2021. Men, who may have faced more pressure to earn, saw a higher shift to informal jobs.

“The pandemic led to a huge loss of salaried jobs, and when there is an informalisation of jobs, it is always very gendered,” said Bhaskar Chakravorty, a doctoral researcher at the University of Warwick, who is a lead author of the research that is likely to be published by the end of the month. “Many of the men have returned to casual labour, mostly in their own fields as farm workers. Rural women of this age group and skill level are vanishing from the labour force entirely,” he added.

He pointed out that by February 2021, rural families had just started to recover from the first lockdown and begun returning to the labour market. The second COVID wave is likely to doom the job prospects of this whole age cohort across rural India, unless immediate action is taken, he added. This group at least had the benefit of DDU-GKY skilling in 2019, but those training centres have also been shut due to COVID.

“For semi-skilled workers from Bihar and Jharkhand, 95% of the job prospects are out of State. So there needs to be strong mechanisms for migrant registration and universal access to government schemes and benefits regardless of the State of residence,” he said, adding that an online job search portal would also help.