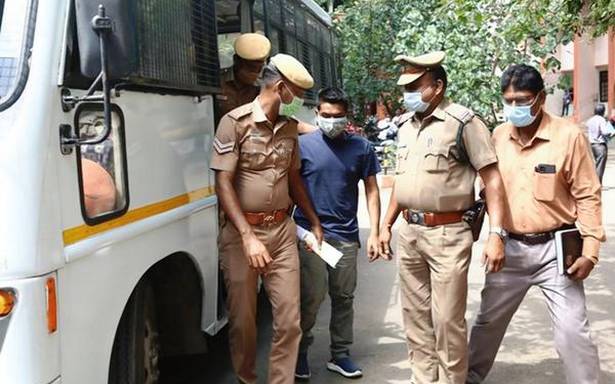 Since both the accused, survivor are in active service, only IAF can carry out legal proceedings: judge

The Additional Mahila Court in Coimbatore on Thursday handed over to the Indian Air Force the case of rape made against a Flight Lieutenant by his woman colleague for court-martial proceedings.

Sources said N. Thilageswari, in-charge of the Additional Mahila Court, ordered that the case must be transferred from the Coimbatore City Police to the IAF as per provisions of the Air Force Act, 1950. Since both the accused and the survivor were in active service under the IAF and the alleged incident occurred within the premises of the Air Force Administrative College (AFAC) in Coimbatore, the judge observed that only the IAF could carry out further legal proceedings in this case.

Earlier, the accused, Flight Lieutenant Amitesh Harmukh (29), was produced in the court. The All Women Police, Coimbatore Central, arrested him on September 25 based on a complaint of the 28-year-old woman IAF officer and he was remanded in judicial custody for four days.

According to the police, the incident occurred in the early hours of September 10 on the AFAC, Coimbatore campus, where both had arrived for a training course. The woman officer, in an FIR registered on September 20 in Coimbatore, alleged that a Flight Lieutenant trespassed into her room and raped her under the influence of alcohol on September 10. She also alleged that her Commandant and senior officers pressured her to withdraw her complaint, and that she was subjected to a two-finger test at the Air Force Hospital.

N. Sundaravadivelu, who appeared for the accused in the court, said the IAF would now form a court of inquiry and subsequently a court-martial for the case. “It is not that the accused has been favoured or the victim has been disfavoured. It is only a question of law [who can investigate],” he told The Hindu, adding that the case had now been handed over to “the rightful authority.”

Meanwhile, the National Commission for Women on Thursday wrote to IAF Chief V.R. Chaudhari on the banned two-finger test conducted on the woman officer following her allegations of rape against a male colleague.

The NCW said it was “utterly disappointed and strongly condemned the action of IAF doctors conducting the banned test on the victim (sic).”

In her letter, NCW Chairperson Rekha Sharma urged the IAF Chief to “take necessary action” and ensure that its medical fraternity is aware of “prevailing guidelines laid down by the government.”

A Supreme Court order in 2013 held that the two-finger test on a rape survivor violated her right to privacy. The two-finger test was also outlawed following the Criminal Law Amendment Act, 2013, which said a woman’s sexual history was irrelevant in determining consent — the premise for conducting the test. Following this, the Ministry of Health and Family Welfare in 2014 formulated national guidelines and protocols for medico-legal care for survivors of sexual violence, which disallowed the use of this test.

When contacted, an IAF spokesperson said, “The IAF is cooperating with the police investigation and is also conducting an internal inquiry.”