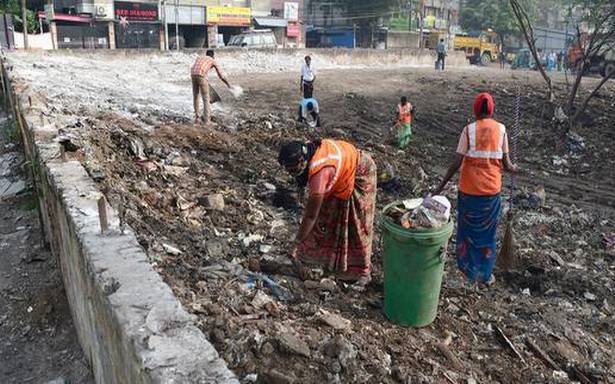 The Hindu had carried a report highlighting the problem

The Greater Chennai Corporation has begun cleaning up the dump in Mogappair East locality that had been seeing indiscriminate throwing of garbage and was consequently posing a health hazard to the residents.

The open space at the intersection of Justice Rathnavel Pandian Road and Oori Road has many houses and small business outlets in the vicinity.

The Hindu had highlighted the issue in a report on Monday. The clean-up was carried out as part of the mass cleaning drive launched by the civic body, the officials said.

R. Meyyappan, a resident, said that the work had been on for the past two days and the place had been free of garbage after several months.

V. Vishal, who runs a business outlet in the locality, said the place was finally free of stench from the decomposing garbage. He stressed on the need for steps to keep the place free from garbage.

“Last night, a few people came to dump garbage. We asked them not to dump there. However, we cannot do that all the time,” he said. He said that the GCC should erect boards on all sides of the ground, warning people that throwing of garbage would attract severe penalty.

Mr. Meyyappan said that GCC should monitor the area for a few days at least and penalise those who dump garbage at the spot. “Only then people will be afraid to throw garbage here,” he added.