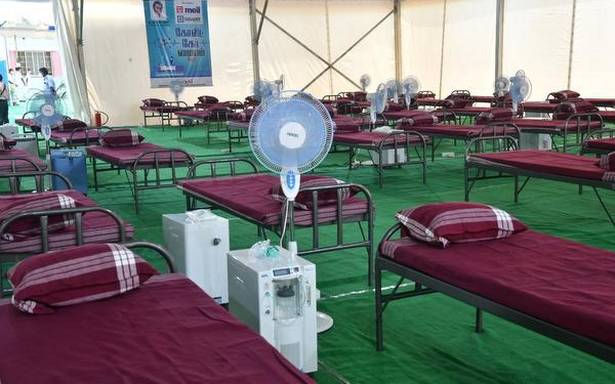 TN Medical Minister Ma. Subramanian on Friday reviewed COVID-19 containment measures in the districts and said the State had more than enough oxygen at present

Minister for Medical and Family Welfare Ma. Subramanian on Friday inspected COVID-19 prevention measures, vaccination centres, containment areas and availability of oxygen beds in Vellore, Ranipet and Tirupathur districts. He said that more than 1,000 additional beds with oxygen facilities have been added in the combined Vellore district.

The Medical Minister, along with Minister for Handlooms and Textiles R. Gandhi and Vellore MP D. M. Kathir Anand conducted the inspection and also inaugurated the additional bed facilities in Ranipet, Tirupathur and Vellore districts.

Later, speaking to reporters, he said that Vellore tops the State in the number of RT-PCR tests conducted. “Till date around 7.55 lakh people have been tested in the district and this is half its population. Within a week, the number of cases in Vellore has dropped drastically,” said Mr. Subramanian.

He allayed fears about oxygen shortage and said that the State had more than the required quantity. “When Chief Minister M. K. Stalin took over, the availability was 230 metric tonnes, but now we have 660 metric tonnes as we are getting supply from Rourkela, Durgapur and Jamshedpur. The requirement however is only around 500 metric tonnes,” he added.

The Minister said that across the State, beds with oxygen support are also available. “As of yesterday, we had over 30,000 beds available. We are seeing an increase in the number of people getting discharged. The number of cases will reduce soon and things will return to normalcy,” he added.

Mr. Subramanian said that 83 mucormycosis (popularly known as Black Fungus) cases were reported in Vellore district and 673 across the State.