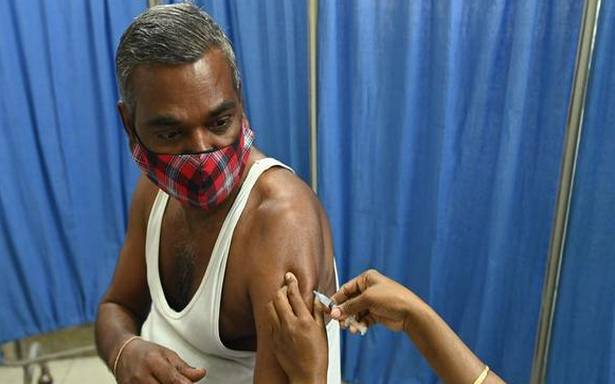 Not possible to ramp up immunisation suddenly, says health official

With a growing public clamour for making vaccines available to all adults, the Union Health Ministry said on Tuesday that India was following a scientific protocol regarding administering vaccines and that it wasn’t possible “to suddenly ramp up” vaccinations.

On a day that the country reported administering a single-day record of 4.3 million inoculations, Health Secretary Rajesh Bhushan said, “When people say that India isn’t vaccinating fast enough, we must remember that vaccinating isn’t like buying something and carrying it home in a bag; it can’t be immediately accelerated. We are following a scientific protocol. We have to observe people for half hour for side effects, reactions. Vaccines aren’t given as a matter of individual choice, but according to need.”

All countries had employed a restrictive criterion that prioritised the elderly, health care workers, those with comorbidities and India too was following a guidance protocol of the World Health Organisation (WHO) in prioritising those most at risk, he said.

V.K. Paul, Member (Health), NITI Aayog claimed that India was the only country that was administering vaccines to even healthy adults over 45. However, the United States, where the eligibility criteria vary by state, anyone 16 and older in several states is eligible to be vaccinated. In Israel too, anyone over 16, has been eligible for a vaccine since the first week of February.

While it wasn’t established what percentage of a region’s population needed to be vaccinated for ‘herd immunity’, it was a “fact” that vaccines protected against severe disease and reduced mortality, Dr. Paul underlined.

Adar Poonawala, CEO, Serum Institute of India said in an interview to CNBC TV18 that a fire in January had delayed the company’s earlier commitment to supply 100 million doses a month from May. Right now, the capacity was about 65-70 million until July and “most of these doses” would be for India. Covishield constitutes over 9 out of every 10 doses of vaccines administered everyday.

On Tuesday, the Indian Medical Association wrote to Prime Minister Narendra Modi asking for vaccination to be open to all adults and that ‘vaccination certificates’ be made compulsory for ‘entering public spaces’ and accessing goods via the public distribution system.

“As there is acute spurt of this disease as a measure to immediate break the chain, limited period continuous lock down shall be implemented especially for all the non-essential areas like cinema, cultural and religious events, sports, etc,” the letter adds. Vaccines should be made available free of cost at the nearest available centres, the IMA said.

The Association attributes the current surge to the “emergent, complacent mass gatherings” without masks, non-compliance with COVID appropriate behaviour and the deterrent mutations in the virus”. It advocated “zero tolerance” against the non-compliance of COVID appropriate behaviours, increasing availability of hospital beds, oxygen cylinders and “enthusiastic engagement” of frontline health workers, adequate health care protective gear.

India’s daily new cases continue to rise with 96,982 new cases registered in the last 24 hours, as per an update from Health Ministry.

Maharashtra continues to report the highest number of new cases at 47,288, followed by Chhattisgarh with 7,302 while Karnataka reported 5,279 new cases. More than 4.3 million vaccination doses were administered in the last 24 hours, the highest single day vaccination coverage in the country so far.