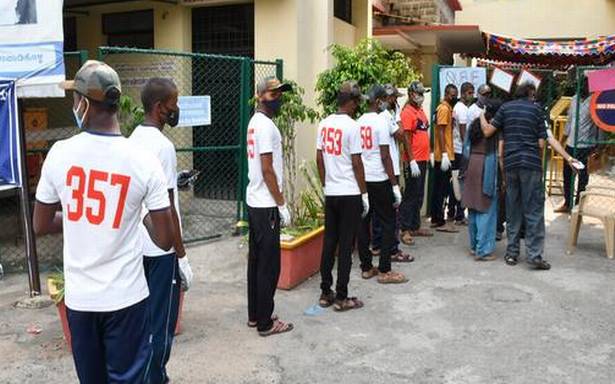 The Centre wants the judiciary to keep its hands off the management of the COVID-19 crisis and its “waves/surges”.

The latest 218-page affidavit filed by the Centre in the Supreme Court on May 9 informs the judiciary in no uncertain terms that “though it [Centre] is duty-bound to fully assist this Honourable Court… the policy, strategy and steps taken by the Executive, based on expert medical and scientific advice, have to be appreciated in the context of the medical crisis”. It said decisions were taken after “detailed deliberations at the highest Executive level”. Hence, no “interference” is called for in judicial proceedings.

In other words, the Centre has asked the courts — Supreme Court and the High Courts — to “leave it open” for the government to discharge its functions in “larger interests”.

Vaccination for those between 18 and 44 years, that began in all major government hospitals and medical colleges from Monday, saw a good turnout with many who had not registered on the CoWIN portal also turning up at the centres.

In Bengaluru, the vaccination for this group was held at K.C. General Hospital, Jayanagar General Hospital, Sir C.V. Raman General Hospital, government medical colleges, ESI hospital and NIMHANS. The demand was so high that the slots got filled up in a jiffy. Nodal officers of the vaccination centres said the slots for the next day got booked in a few minutes soon after the site was open for registration. According to the data from the Health Department, 10,300 beneficiaries in the 18-44 age group took the jab till 8.30 p.m.

India variant is of global concern: WHO

The World Health Organziation said on Monday that the B.1.617 variant first identified in India last year was being classified as a variant of global concern. “We classify it as a variant of concern at a global level,” Maria Van Kerkhove, WHO technical lead on COVID-19, told a briefing. “There is some available information to suggest increased transmissibility.”

The Centre informed the Supreme Court that the production capacity of COVID-19 vaccines had been “gradually ramped up” in the light of the immunisation drive.

“In times of grave and unprecedented crisis when the nation is fighting a disaster of unprecedented magnitude, the executive functioning of the government needs discretion to formulate policy in larger interest. It is submitted that in view of the unprecedented and peculiar circumstances under which vaccination drive is devised as an executive policy, the wisdom of the executive should be trusted,” it noted.

The State government on Monday told the Madras High Court that it had received 5.16 lakh doses of COVID-19 vaccines for inoculating people in the 18-44 age group.

Stating that it had paid 100% advance amount to two domestic vaccine manufacturers for procuring 13.85 lakh doses allotted by the Centre in the first phase, the government said it was yet to receive the rest of the 8.68 lakh doses.

U.S. regulators on Monday authorised Pfizer and BioNTech’s COVID-19 vaccine for use in children as young as 12, widening the country’s inoculation program as vaccination rates have slowed significantly.

The vaccine has been available under an emergency use authorisation (EUA) to people as young as 16 in the United States. The vaccine makers said they had started the process for full approval for those ages last week. The U.S. Food and Drug Administration said it was amending the EUA to include the millions of children aged 12 to 15.

As many as 1,952 employees of the Indian Railways have died due to COVID-19 since March 2020, and nearly 1,000 are getting infected daily on an average, Railway Board Chairman and CEO Suneet Sharma said on Monday.

“It [the COVID-19 situation] is a challenge. Railways are no different from any other State or territory…we also have COVID cases…We are in the business of transportation. We need to run trains to transport essential items, passengers as well as freight,” Mr. Sharma said during a press conference. The Railways are one of the country’s largest employer with around 12 lakh employees.