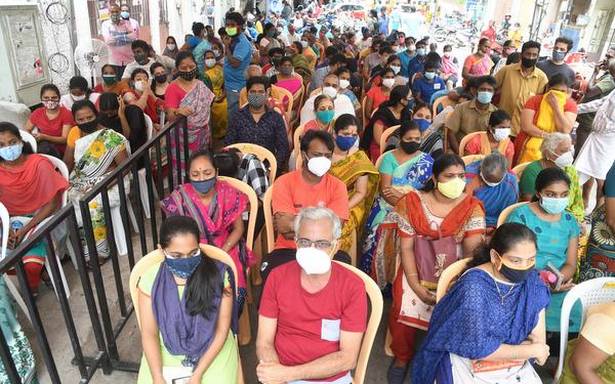 22.8% of adults in the country have got at least one shot.

The figures do not include cases and deaths from Punjab, Arunachal Pradesh, Chhattisgarh, Jharkhand, Tripura, Lakshadweep, and Ladakh. The data are sourced from the respective States’ health bulletins.

Around 19.3 lakh samples were tested in the country on June 15 (the results for which were made available on June 16).

About 28 lakh vaccine doses were administered in the country in the 24 hours ending 7 a.m. on June 16, which is 11.26 lakh doses fewer than what was recorded in the previous 24 hours. It is also 24,362 doses more than what was recorded during the corresponding period a week ago. The seven-day rolling average of daily vaccinations in the country continues to increase. It stood at 31.14 lakh on June 15, which is more than the 26.96 lakh recorded a week before (June 8).

India is also administering the highest number of average doses in the world, followed by the United States (1.14 million), Japan (1 million), and Brazil (0.92 million).

India continued to record the highest number of 7-day average daily deaths in the world with 3,721 deaths recorded on June 15. The two other countries with the highest fatality count after India were Brazil (1,986) and Colombia (577). Nearly 34% of the world’s new deaths were recorded in India on June 15.