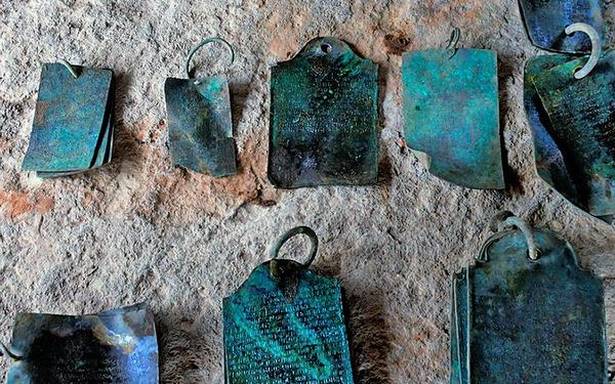 The Bhramarambha Mallikarjuna Devasthanam, engaged in reviving ancient Ganta Matham near Srisailam temple complex, chanced upon six sets of copperplate inscriptions on Sunday. There were 18 copper leaves found, said temple Executive Officer Karanam S. Rama Rao. The inscriptions depict the far and wide patronage by people, he added. Telugu University’s School of History, Culture and Archaeology Professor P. Chenna Reddy said that the copperplates found at Srisailam could be dated back to somewhere between 14 and 16 centuries. Out of the six sets, four have inscriptions in Sanskrit and Nandi-Nāgarī script and the other two plates are in Telugu script, he added.