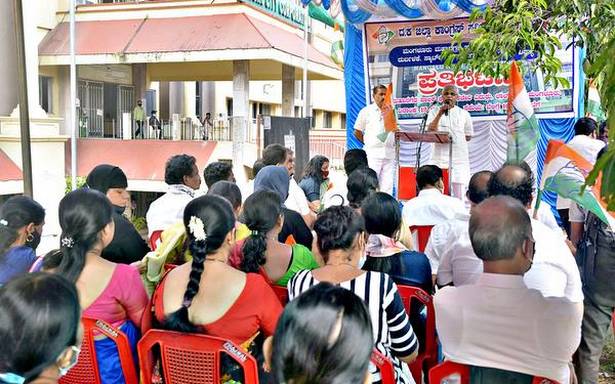 The Congress staged a dharna in front of Mangaluru City Corporation on Tuesday protesting against Mangaluru Smart City Ltd. stopping works on various projects taken up in the city under the Smart City mission.

Speaking on the occasion, former Minister B. Ramanath Rai said that the Congress had toiled hard to get smart city projects to Mangaluru. But the BJP has failed to implement the projects sanctioned. Leader of the Opposition in the city corporation council Abdul Rauf said that the city corporation led by the BJP and the MSCL has not taken people into confidence while taking the projects under the mission.

The former MLA J. R. Lobo said that the smart city projects are now in a pathetic condition. Most parts of the city have been dug up posing problems to common people.