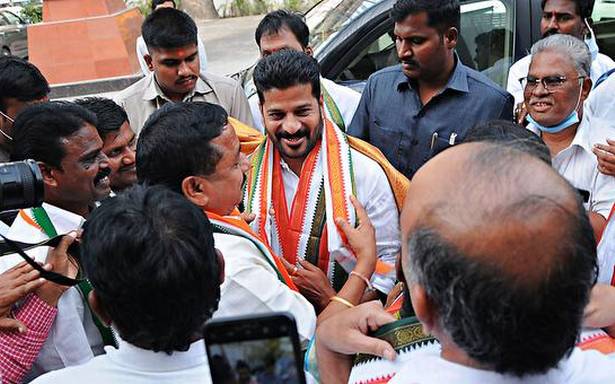 Four teams of the Congress will tour Telangana on Sunday to study the controversial paddy cultivation issue and also the problems being faced by farmers, and submit a report to Congress president A. Revanth Reddy.

This visit is a part of the Congress decision to get into an offensive mode against the government’s decision not to buy paddy in the next Yasangi season and threats by the Ministers and officials to the farmers against paddy cultivation.

A meeting of the senior leaders led by Mr. Revanth Reddy at Gandhi Bhavan discussed the issue threadbare and decided to send Congress teams to all the districts. Later, speaking to reporters along with G. Chinna Reddy, Dasoju Shravan, Manavata Roy and Shivasena Reddy, the TPCC chief said a series of protests would be organised in the next few days on the farmers’ issues, Dalit Bandhu, rising fuel prices and the concerns of unemployed youth.

Mr. Revanth Reddy said the government’s attitude against paddy cultivation was nothing but an attack on the farmers and the death of a farmer in Kama Reddy on Friday was result of government’s apathy towards the farming community.

He alleged that the Collectors had become slaves of the Chief Minister rather than acting like officials to safeguard people’s interests. It was shameful that officials had described the death of Kama Reddy farmer as a natural death though he died with concerns over paddy procurement by the government.

Blaming the Chief Minister, he said as per National Crime Records Bureau 7,409 farmers died in Telangana though the unofficial figure would be around 40,000. He warned that Congress would not keep quiet if the government failed to procure entire paddy as promised.

Mr. Manavata Roy attacked the TRS and BJP governments, accusing them of cheating the unemployed youth. While KCR had totally ignored recruitments pushing the unemployed youth to suicides, he said it was unfortunate that the BJP government had snatched even the existing employment opportunities through privatisation. “Where are the 2 crore jobs promised by Mr. Modi,” he asked and said they would present a memorandum to Prime Minister Modi during his visit to Hyderabad on November 12. He ridiculed State BJP’s planned protests against unemployment and said it should first ask Mr. Modi to generate the 2 crore jobs promised every year.

On the rising fuel and cooking gas prices, the Congress would lay siege to the Civil Supplies Bhavan on November 8, said AICC spokesperson Dasoju Shravan. He said the Central and State governments were fleecing people with exorbitant charges on fuel and cooking gas. He demanded that fuel prices be reduced by ₹10 per litre and cooking gas by ₹200 per cylinder immediately.