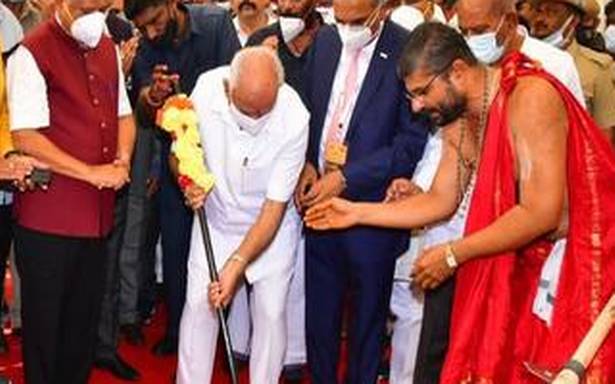 Chief Minister B.S. Yediyurappa offered bhumi puja and laid the foundation stone for a toy cluster, which was claimed to be India’s first and largest toy manufacturing hub, near Bhanapur in Koppal district on Saturday. He also announced that the project was expected to be completed in a year and he would invite Prime Minister Narendra Modi for its inauguration.

“Koppal is known for traditional Kinnal crafts. I feel proud to establish a toy cluster in this place. The cluster is expected to generate a large number of direct and indirect jobs in the area. It would provide ample employment opportunities to women in the region,” he said.

The Chief Minister also announced a host of development projects for Koppal district, which included the establishment of a university and a mini-Vidhana Soudha at Kukanur.

“Karnataka is one of the leading States in the country in attracting investments. An industry-friendly environment has been created in the State. The simplification of industry-related regulations and liberalisation of land purchase legislations have helped us to do it. Now, we are planning to move from Bengaluru-centric development to distribution of industries in rural areas across the State so that we can stop large-scale migration from rural areas to megacities,” Mr. Yediyurappa said.

“Toys could be sold in all countries. Once the toy cluster is ready in Koppal, many companies would come and invest here. The toys manufactured here would be exported. As per our new industrial policy, local people would get priority while offering jobs in the cluster. After the new industrial policy came into force, the Bengaluru-centric industrialisation has stopped to pave the way for the expansion of industries in tier-2 and tier-3 cities. North Karnataka is a major beneficiary in this regard,” Mr. Shettar said

Sanganna Karadi, Lok Sabha member from Koppal, appealed to the Chief Minister to sanction an airport for Koppal and provide funds to the district court complex.