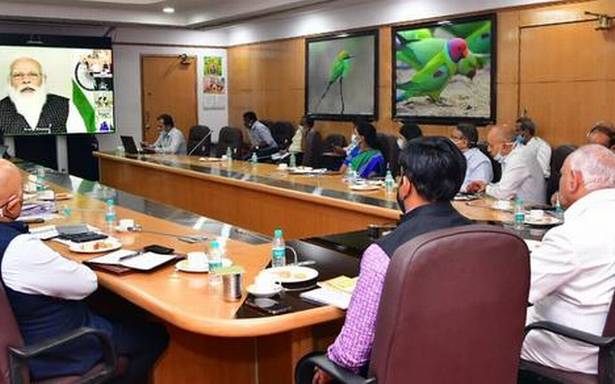 Chief Minister B.S. Yediyurappa on Friday appealed to Prime Minister Narendra Modi to allocate a minimum of 1.5 crore doses of COVID-19 vaccine per month to Karnataka.

The Chief Minister made the appeal during a video conference chaired by the Prime Minister to interact with Chief Ministers of all the States to take stock of the situation with respect to COVID-19.

The Prime Minister asked the States to take precautions in the wake of an increase in the number of COVID-19 cases in Europe and other countries. He suggested that the States improve their health infrastructure as part of such precautionary measures.

Briefing the Prime Minister about the preparations made by Karnataka to tackle the third wave of COVID-19, Mr. Yediyurappa said the State needs five lakh doses of vaccine a day. So far, 2.62 crore doses of vaccine had been used in Karnataka, he pointed out.

He said the State government had given full freedom to deputy commissioners to take a call on restrictions to be imposed in their respective districts based on test positivity rate, number of new cases and recommendations of the technical advisory committee.

He said as part of preparations to handle the third wave of the pandemic, the number of oxygenated beds, ventilator beds and paediatric ICUs were being increased in all health centres. The necessary equipment for COVID-19 treatment was being purchased in adequate numbers, besides setting up new RT-PCR and genome sequencing laboratories.

He appealed to the Centre to provide 800 neonatal and paediatric ventilators under the PM-CARES Fund.