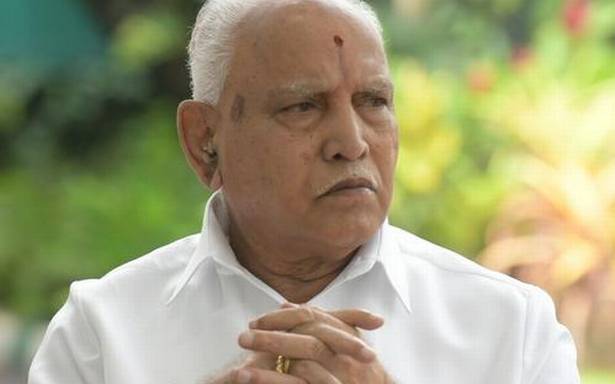 CM goes into a huddle with his confidants

A 47-second audio clip allegedly of BJP’s State president Nalin Kumar Kateel created ripples in State political circles on Monday as it hinted at leadership change. Though Mr. Kateel denied that it was his voice and sought a probe into the “fake” clip, many legislators in the party, cutting across camps, took the contents of the clip at face value, triggering off further speculations, disappointment, and intense lobbying.

In the purported clip, the person, speaking in Tulu, indicates there will be leadership change in the State, “three people are in the race and the next Chief Minister will come from Delhi” and that “Jagadish Shettar and Eshwarappa’s teams will be removed from the Cabinet”.

The audio clip created anxiety and panic in the Chief Minister’s camp. Many of whom who were confident till Sunday of Mr. Yediyurappa completing the full term, started questioning whether there was any truth in it and some of them rushed to the Chief Minister’s residence to clarify. Adding fuel to speculations, Mr. Yediyurappa huddled with his confidants which included Ministers Basavaraj Bommai and R. Ashok over lunch at a star hotel in Bengaluru on Monday.

Meanwhile, Mr. Eshwarappa, while saying he believed Mr. Kateel when he said the clip was fake, also said that being a loyal party worker he would abide by any decision that the party takes. “It would not even pain me. I will be a Minister until the organisation asks me to. I am 72 years old now and it is evident that the organisation is giving opportunities to youngsters both in the party and in administration. If that is the party’s call, I will go,” he said, appealing against making Mr. Kateel a “scapegoat” on this issue.

Amidst speculations and intense lobbying over alternative leadership if Mr. Yediyurappa is replaced, the person in the audio clip claiming the new Chief Minister will come from Delhi, has unsettled many “aspirants” in the State, sources said.

Meanwhile, several Ministers, especially those who defected from the Congress and Janata Dal (S), are also anxious of their positions, if leadership change is effected in the State.