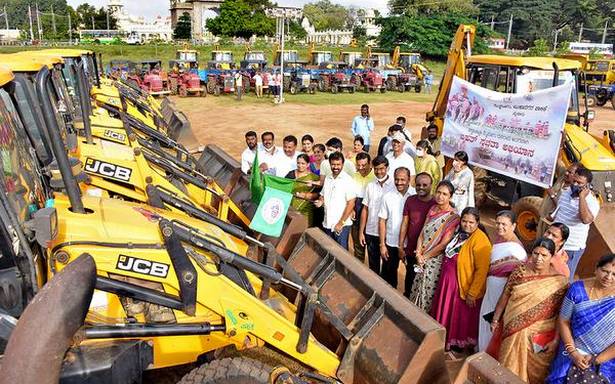 The Mysuru City Corporation (MCC) on Monday launched a mega cleanliness drive ahead of Dasara. The MCC deployed nearly 150 vehicles that will be operational till October 6 while additional civic workers have been roped in for the festival period.

“These vehicles belong to contractors who have taken up various works of the MCC and have lent it to the corporation for three days for free. This will help clear accumulated garbage from various dumping sites and also the black spots,” said D.G. Nagaraj, Health Officer, MCC.

The vehicles deployed are in addition to the civic body’s own fleet of tippers and trucks used for door-to-door collection of garbage. The vehicles provided by the contractors will be deployed to clear the main tourist spots and important commercial streets, said Dr. Nagaraj. In addition, the black spots along the Outer Ring Road will also be cleared using these machinery, he added.

To ensure that the city remains clean during the festival period, the MCC has also roped in additional civic workers on contract. But as the festival has been scaled down due to the pandemic, the number of contract workers roped in for Dasara duties is also less.

But this year the cultural programme will be restricted only to the palace premises and hence the focus will be on main roads and thoroughfares, according to the authorities.