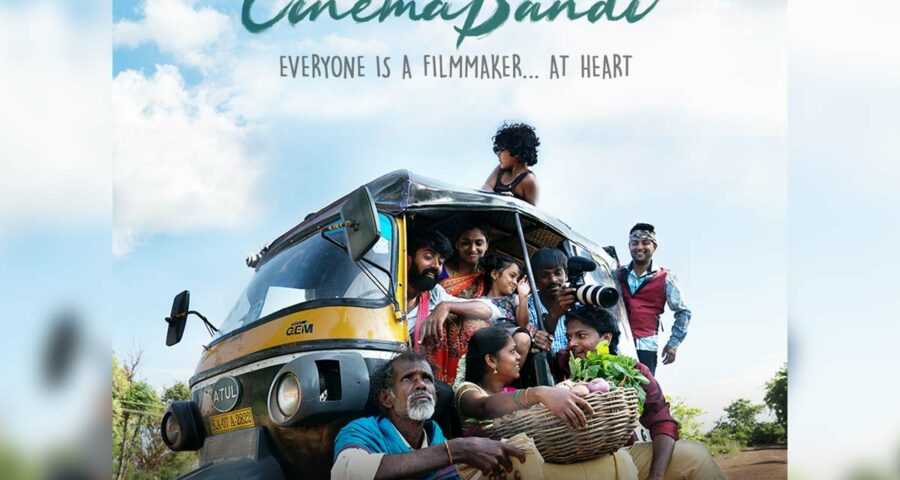 Story: Veerababu (Vikas Vasishta) who drives an auto in his village for a living and  accidentally  he finds a DSLR camera forgotten by some passenger in his auto. He decides to shoot a film with the camera that will earn him Rs 100 crore profit at the box office and  hires Ganapati(Sandeep Varanasi) who is a wedding photographer as the cameraman and a barber Maridesh Babu as the hero whereas vegetable vendor Manga as the heroine for his movie. Will Veerababu and Ganapathi finally make the film they want? form the rest of the story.

Performance: Vikas Vasishta, who is playing the hero, does a great job.  Sandeep Varanasi is fine.  Trishara in a key role, impresses with her natural acting. Each and every character in  this film is very natural. Each character moves the story forward implicitly. Rest of the cast of Cinema Bandi justifies their roles.

Technical: Cinema Bandi gives a deep insight into the urban and rural divide and has scenes interspersed beautifully to highlight the difference.  Approva Shaligram and Sagar YVV’ cinematography are the major highlights of the film.  The village atmosphere gives a realistic feel.  The background music by Satyavolu Sirish impresses everyone.  The  few comedy scenes that are not necessary for the story should have been edited out.

Analysis: Cinema Bandi is a genuine attempt to explore the love and fascination for cinema.