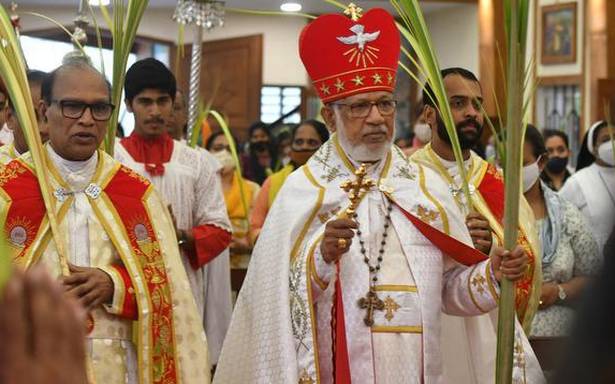 Cardinal George Alencherry, major archbishop of the Syro-Malabar Church, in a pastoral letter, sent out to be readin all the parishes of the Syrian catholic Church on October 5 during the Sunday Mass, called upon the church members to adhere to the unified system of celebrating the Mass as per the decision of the synod of bishops, which met online early this month.

The unified system of celebrating the Mass will come into effect from the new liturgical cycle starting on November 28, 2021, with the feast of Annunciation, said the pastoral letter, which also appealed to the clergy and faithful to set aside "individual preferences" and to work towards the unity of the church as desired by the members of the synod of bishops.

The pastoral letter has been widely circulated even as a large group of priests and lay people are scheduled to meet Archbishop Antony Kariyil, archdiocesan administrator to convey their protest against the synod decision to impose a unified system of offering the Mass.

The division in the Syro-Malabar church is a long-running one and relates to the way the Mass is celebrated. While the vast majority of the parishes under the Syro-Malabar Church celebrate the Mass with the celebrant (priest) facing the faithful, there are some dioceses where the Mass celebrated with the priest facing away from the people or facing the tabernacle (holy of holies). There are also some parishes where the celebrant faces the people during most of the Mass time and faces the altar or turns away from the participants for brief periods of the rituals.

The Major Archbishop also said in the pastoral letter that efforts should be made to avoid any further division on the issue of the way the Mass is celebrated. Priests and religious should take special care in this matter, the pastoral letter added.

The Major Archbishop said that the synod of bishops, which met between August 16 and 27 online, looked deeply into the issues related to a unified way of celebrating the Mass even as Pope Francis had given a call to unity. The Pope has been cited at the beginning of the pastoral letter as calling upon the priests, religious and the lay believers to use the opportunity for a unified celebration of Mass to cement the overall unity and betterment of the church.

The pastoral letter recalled that the Syro-Malabar church had been on the path of renewing the liturgy since 1934. Deeper studies had begun in 1984. As a result, performance of various ceremonies and rituals had been unified even though differences prevailed over the celebration of Mass. Though a unified system was prescribed in 1999, it could not be implemented across the church, the pastoral letter said. There was a demand from pastoral council secretaries during the 2019 synod meeting for a unification of the way the mass is celebrated. The different ways the Mass was being celebrated during the COVID-19 pandemic had created unrest among the church members, claimed the pastoral letter.