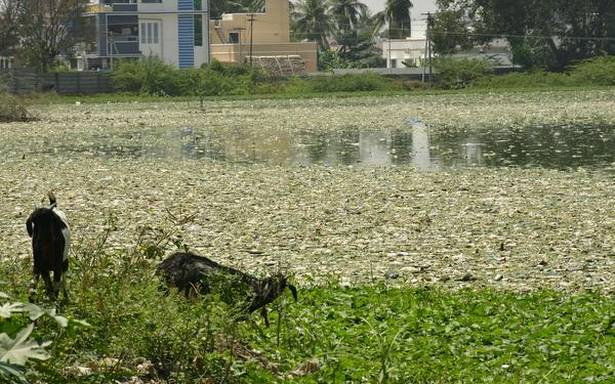 Waste from households, commercial establishments is dumped into the lake

The Thuraiyur Chinna Eri has become the garbage dump of the town with plastic waste floating on what used to be an irrigation source for farmlands nearby.

Passengers who alight at Thuraiyur bus stand which faces the lake are put off immediately by the sight of the polluted lake and the stench emanating from it. Residents living nearby and commercial establishments blame one another for the poor state of affairs, while authorities say they do take up regular desilting work.

The lake used to be the centrepiece of the town, but now it is a symbol of shame for all of us, said M. Rajasekar, an autorickshaw driver who parks his vehicle by the lake. “There is a lot of water in the lake, but it is unfit for any purpose. Thuraiyur experiences water shortage every summer, but we have no hope of putting the lake to better use unless and until we learn to keep our surroundings clean,” he said.

Waste from households, street vendors, roadside eateries and commercial establishments make their way into the lake. “These people stealthily come at night and dump the garbage into the lake. When they can make the effort to come all the way and dump it into the lake, why can’t they instead put it in a dustbin, or give it for recycling?” a flower vendor said.

The lake poses a major health hazard. It has also become a breeding ground for mosquitoes. “We are just recovering from the COVID-19 scare. With the lake’s condition, we might fall ill from some other infection soon,” a passer-by said.

With the lake located in the heart of the town, it reflects poorly on the civic body’s maintenance. However, municipal officials say it comes under the Public Works Department. “We have written to the PWD to desilt the lake. We are collecting waste from commercial establishments and residences regularly. We are unsure of the source of the waste dumped into the lake,” a senior official said.