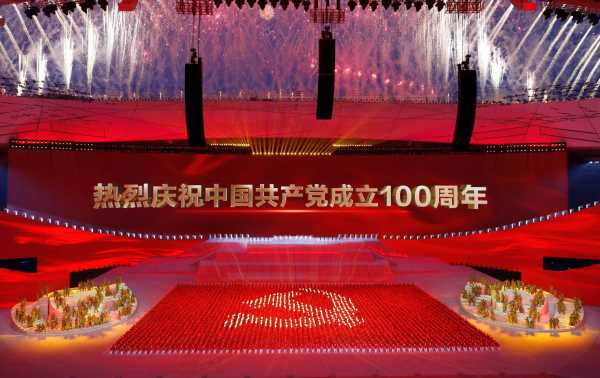 China’s ruling Communist Party which had a vice-like grip on the destiny of the world’s most populous nation besides diverse influence on international leftist movements and global politics will turn 100 on Thursday.

The highlight of the occasion, according to officials, is an address to a special gathering in the morning by President Xi Jinping, who cast himself in the mould of Mao Zedong, the founder of the Communist Party of China as it is officially called.

While much of the “grand celebrations” as Xi put it earlier were shrouded in secrecy, the Hong Kong-based South China Morning Post quoted the officials as saying that there will be no military parade.

Earlier, there was speculation about a military parade at the historic Tiananmen Square, demonstrating China’s new military hardware.

Some of the latest helicopters and fighter jets conducted rehearsals a few days ago.

The sprawling Tiananmen Square, where the Great Hall of People is located, has been completely blocked for about a month and also much of the events in the past few days like Wednesday’s presentation of medals by Xi to 29 CPC members who have made “outstanding contributions to the Party and the people”.

Journalists who are invited to attend Thursday’s event are required to get both the doses of the Chinese COVID-19 vaccines.

They have also been asked to produce a negative certificate of coronavirus test taken 48 hours before the event besides a second test before checking into a designated hotel on Wednesday from where they will be taken to the venue in the early hours.

According to the Post, diplomats who are invited to the event can also attend if they have had a foreign vaccine.

China, which had stopped international travel to most of the countries after the coronavirus emerged in Wuhan in December 2019 and became a global pandemic, has contained the spread of the virus with stringent measures, though it continued to report a handful of cases every day in different parts of the country.

Much of the focus would be on Xi’s speech, considering China faces global adversity over the origins of the COVID-19, allegations of genocide against Uygur Muslims in Xinjiang, massive crackdown in Hong Kong to put down the mass dissent, besides murmurs over his tenure.

The United States, the European Union, Japan and a host of western countries have mounted a united campaign to rein in China’s authoritarian governance at home and its attempts to forge a new global order with multi-billion Belt and Road Initiative.

Commenting on the CPC centenary, Gu Su, a political scientist at Nanjing University in China, said that the 100th anniversary might not yield any major announcements.

“The centenary is the most important year for any commemoration so the Party’s centenary will be very big. But we might not see any major policy announcements. That part might be left to next year’s party congress,” he told the Post.

“A lot is still undecided and China is facing lots of domestic and international challenges,” he said.

Internally, the leadership of the party became one big challenge for the CPC as unlike his predecessors who retired after two five-year terms, 68-year-old Xi was expected to continue in power for life following a constitutional amendment doing away with the two-year term for the President.

The retirement age for Chinese leaders and officials is 68.

For its part, the CPC founded by Mao and his handful associates in 1921 grew to be a dominant political power fighting bloody wars at home both against political rivals and the Japanese occupation and took over power in 1949 forming the People’s Republic of China.

Mao and the CPC remained influential in the international Communist movement, first as a close ally of the dominant Soviet Communist Party and later turned into its bitter ideological rival resulting in vertical split of the global left movements.

At home, the CPC has undergone a total ideological makeover after Mao’s death in 1976.

On the brink of collapse after Mao’s disastrous ideological experiments like the 1958 “Great Leap Forward” and the 1966 ‘Cultural Revolution’, which resulted in the deaths of over 1.5 million people, the CPC was revived by moderate “paramount leader” Deng Xiaoping.

Deng, who won the bitter power struggle against the ‘Gang of Four’ headed by Mao’s widow Jiang Qing, overturned Mao’s hardline Marxism, replacing it with a pragmatic ideology of “Socialism with Chinese Characteristics” which helped China to emerge as the second-largest economy of the world.

“On the new march to a fully established modern socialist nation, keep moving toward the goals of the second century,” Xi said.