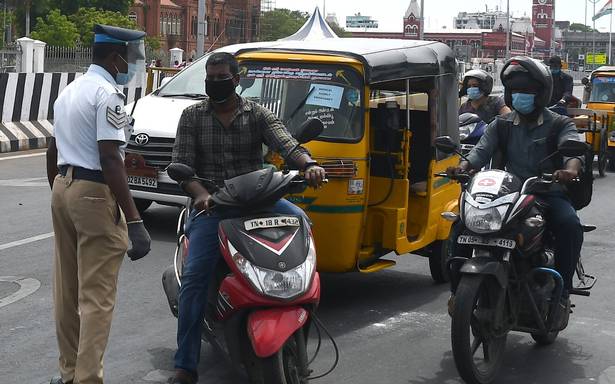 An all party meeting chaired by Chief Minister M.K.Stalin on Thursday decided to tighten lockdown norms

The city police intensified the enforcement drive against people roaming on vehicles or venturing out from their neighbourhood without any reason flouting lockdown norms.

In order to prevent spreading of COVID-19, the government announced complete lockdown till May 24. Public were advised to follow COVID appropriate behaviour such as wearing masks, frequent use of sanitiser and maintenance of physical distance in public places.

For the last four days, the police personnel have been campaigning using public addressable systems and distributing pamphlets. However, thousands were seen roaming on roads without any reason flouting lockdown norms.

An all party meeting chaired by Chief Minister M.K.Stalin on Thursday decided to tighten lockdown norms. In pursuance of the decision, the city police personnel have intensified vehicle checks at important junctions on arterial roads such as Anna Salai, EVR Salai, Kamarajar Salai and other places from Friday morning.

Iron barricades were erected on the roads to curb the movement of vehicles. Vehicle check is being conducted at 200 places by Law and Order and 118 places by Traffic wing police personnel. Flyovers are closed for vehicular traffic.

Additional Commissioner of Police N. Kannan said, "We have divided the arterial roads into two lanes. Emergency vehicles are allowed in one lane and uniformed police personnel stop the vehicles in the other lane and ascertain the purpose of moving on roads by asking the vehiclists to produce relevant documents. If anyone is found roaming without any reason, personnel impose a fine on the spot. Vehicle is also detained in case of plying of vehicles unwarrantedly and released only in the evening."

Police also impose fine on those who were found not wearing masks or failing to maintain physical distance in public places.

"It is hereby warned that appropriate legal action will be taken against those who roam on vehicle or venturing out without reason. People have been advised to follow the guidelines laid down by the government and avoid themselves from subjecting to such legal actions," said the DGP.