Five-month-old Pari is the third infant who was cremated at the Seemapuri crematorium since April this year. She was the youngest child to be buried at the crematorium where more than 2,000 cremations have taken place this year. 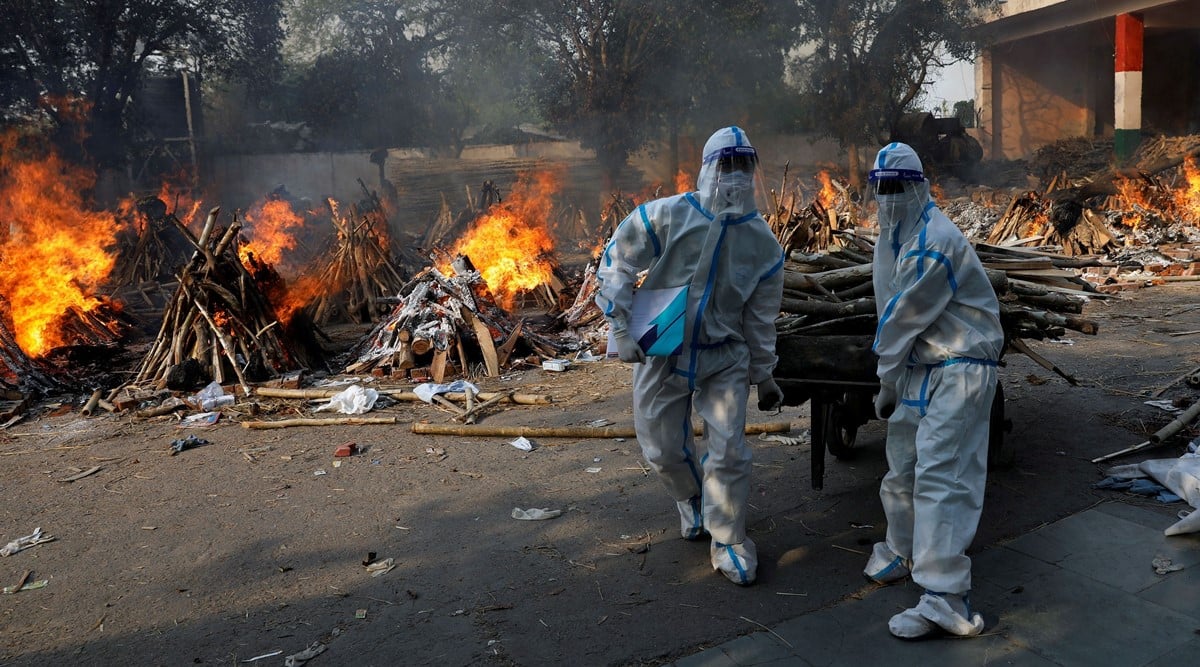 Prahalad (32) sinks every time his two-year-old son asks him, “Mera babu kahan hai (Where is my babu)?”

The father has no answer. He can’t possibly explain to his son how his five-month-old sister, Pari, suddenly came down with an illness, the RAT test which sent shockwaves down his spine as it revealed she had Covid and her final shrieks at GTB hospital where she died.

“Mera Babu Kaha hai (Where is my babu)?” the son asks his father again. Prahalad has no answer as he breaks down, “Paisa bhi gaya, bachi bhi gayi, humara sab kuch chala gaya (I lost my money, daughter and everything), ” he said over the phone.

Pari is the third infant who was cremated at the Seemapuri crematorium since April this year. She was the youngest child to be buried at the crematorium where more than 2,000 cremations have taken place this year.

She died on May 12 at 11: 57 am at GTB hospital. Her death certificate mentions that she had pneumonitis, sepsis and cardiopulmonary arrest.

Her body was dispatched in an ambulance along with the body of an adult. The crematorium workers at Shaheed Bhagat Singh Sewa Dal, headed by Jitender Singh Shunty, were waiting for the bodies. When they saw her body wrapped in a small white disposable bag, Shunty ran towards the man holding the body in his hands and asked him what her name was. “Pari,” her father replied.

“She definitely is Pari. She is like an angel, a doll,” Shunty said as he carried her in his arms and buried her.

At his home in Nand Nagari, Prahalad looks for answers. How did his daughter get Covid?

“I was told that little children don’t get the disease. There was a strict quaratine at my home. My daughter never left her home,” Prahalad said.

He has five family members who are holed up in their home. He used to work at a local factory for Rs 9,000 per month. As the lockdown was announced, he and his younger brother lost their jobs. This was familiar. They spent months without a job during last year’s lockdown.

What was unfamiliar was that Pari’s fever suddenly shot up around 15 days ago. Then her 52-year-old grandfather developed a persistent cough.

Prahalad first took her to two private hospitals where after conducting several tests they asked him to refer her to St Stephens’s hospital. “We did not have much money. One blood test was costing us Rs 1,200. I could not afford to take her to St Stephen’s, so I took her to Chacha Nehru hospital where they diagnosed her with Covid.”

Pari’s family then finally referred her to GTB hospital on May 6. Her grandfather was also admitted to the emergency ward of the hospital where he was lucky enough to get an oxygen cylinder.

Then came the whole family’s test result. “We were all negative. How could my daughter get Covid?” Prahalad said. Prahalad also discharged his father from GTB. Pari remained at the hospital hooked to a ventilator.

Pari’s last days were spent in pain, her family said. She used to scream in pain when the fever shot up and when her body cooled down she gestured to her father to pick her up and take her outside. “We knew she wanted to play. My daughter held my finger in her tiny hands and looked at me. She could not understand what was happening to her. Why she was in a place full of strangers,” Prahalad said.

Then came good news in days. Her condition improved as her fever subsided. Prahalad decided to return home after his mind and body were burnt out. The minute he stepped inside his house, the hospital called him and his heart skipped a beat. “The doctors told me my daughter had just a day to survive and I should come back quickly. I could not believe it. She was fine and suddenly she just had a day.”

The doctors were wrong. Pari died within two hours of the phone call.

Following her death, her family has now been making a list of expenses. They spent around Rs 12,000 for Pari’s expenses. The family does not think it will survive the next month. “Where is babu?” Pari’s brother asks a third time, and this time his mother breaks down.

“Everyone I speak over the phone, my son thinks it is a video call with Pari. I never registered an official name for her because of the pandemic. But since my son called her Pari, we thought that would be her official name. That is the name we used in her death certificate,” Prahalad said.