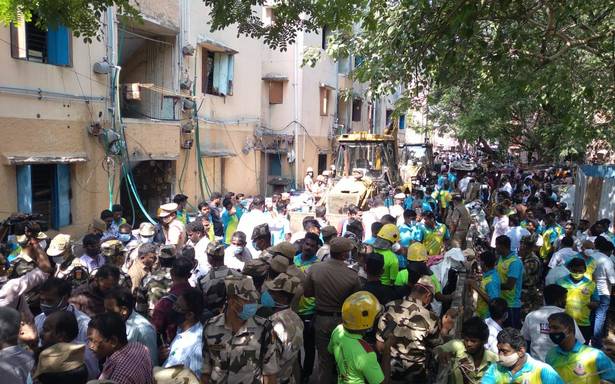 Regretting the incident, he announced financial assistance of ₹1 lakh to each of the affected 24 families

Alternative housing would be provided to residents of a Tamil Nadu Slum Clearance Board apartment, which collapsed in Tiruvottiyur, Chennai, Tamil Nadu Chief Minister M.K. Stalin announced on December 27.

Regretting the incident, he announced financial assistance of ₹1 lakh to each of the affected 24 families to start a new life. Alternative housing facilities would be provide to these families.

A total of 24 housing tenements in the building that was constructed in 1993 by Tamil Nadu Urban Habitat Development Board (then Tamil Nadu Slum Clearance Board), he said.

Minister for MSME (also holding the slum clearance portfolio) T.M. Anbarasan has been deputed to the spot to monitor relief operations and he has been instructed to provide alternative housing to the affected families at once.

"I have instructed for collecting the details of such old buildings so that safety measures could be undertaken to avoid such incidents in the future," Mr. Stalin said.